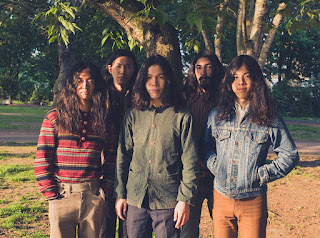 Kikagaku Moyo - In a Coil.

Background - Last week, Kikagaku Moyo released "In A Coil," the lead single, from their upcoming new EP. Their 5-track record 'Stone Garden' is set to come out April 21st, via Guruguru Brain. The band has recently announced their spring North American tour, to kick off in Philadelphia on May 2nd.

'Stone Garden' started in a basement studio in Prague with a nearly continuous session over several days and nights. The original concept was influenced by the raw and seemingly endless jams of psychedelic pioneers. The freeform songs that emerged from those sessions were refined over several months at the band's home in Tokyo where each song was sculpted into an uncommon form.

Compared to their relatively song based previous LP 'House in the Tall Grass,' 'Stone Garden' is a window into Kikagaku Moyo’s experimental side.  While improvisation is essential to their songwriting process it can take on many forms. This record enabled the band to experiment not only with instrumentation but also atonality and a playful approach to mixing.  The unexpected results have become five unique songs each woven together through the same process. Website here, Facebook here, tour dates on Beehive Candys tour page.

Musical sounds swirl around the hypnotic rhythm on 'In a Coil' whilst the vocals are softer and immersed in the mix. Trippy psych music that is just so engaging. 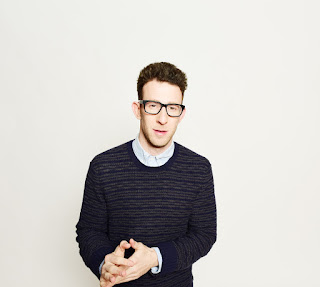 Nick Blaemire’s upcoming solo release, The Ampersand EP, is a departure from his previous theater and television career. Punchland premiered the single, stating, “Every bit of this tune could easily cause one to walk the city streets and blend right in with it’s soulful bliss. Not a thing could bother a listener here. Pop and R&B merge well and the average Joe will linger on the subway just a bit more to stay in the musical dream even with that soft ending. Time to place on repeat” (Punchland). Check out the premiere here, and Punchland’s rave review of his set at Rockwood Music Hall here. With a performance at C’Mon Everybody on March 17th and an 80s teen romance inspired video on the way, Blaemire is one to keep eyes on. The Ampersand EP is due out in March 2017.

Stepping away from the Broadway stage, Blaemire is inspired by the wallflower, the underdog and that kid who doesn't yet have the guts to ask the girl out. His "nerd soul" vibe perfectly bridges classic soul with the innocence and cliche of 80s films - John Hughes, for example. Combining classic soul hooks with a pop energy, Blaemire’s collection of easily digestible tunes is not to be missed. Playing off of this character, Blaemire radiates positivity, bringing a new energy to the mainstream pop scene. Facebook here.

'She's You' is an infectious pop song with upbeat soulful vocals and a vibrant soundtrack. The music video catches and conveys the mood of the piece, it's now clear nerd soul rules, in the shape of Nick Blaemire.

MOLLYANNA have supported Joseph on their UK tour, and Kate Jackson, (formerly of The Long Blondes), appeared at Tramlines and won the 2016 SYFN award for Best Song in their annual music video awards.

“Louder,” is a flawless track which we have really high hopes for. Everything from the effortless vocals to the overall composition of the song is perfect and we are excited to see it grow. Facebook here.

Slowly the power and drama unfolds as 'Louder' unleashes it's passion. The band provide energy and momentum occasionally adding melodic refrains. Vocals are poured out with passion and angst, there's a story to be told, and you will hear it! 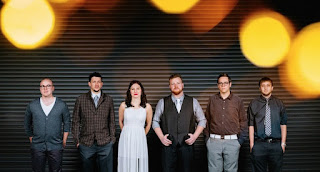 The Company Stores - So Good.

Hailing from Charleston, WV, The Company Stores combine Appalachian folk influences with a progressive, electronic sound that isn't afraid to break boundaries and genre lines;  even delving into hip-hop and funk territory.  The band quickly made a name for themselves following their 2014 regionally acclaimed LP, Rollin' In.  The Company Stores continued to tour, grow their fanbase, and hone in the eclectic sound that would become the groundwork for their upcoming full-length, Little Lights.

This is a band that will never lose touch with their roots.  The moniker refers to a store in Appalachian coal towns during the 19th and 20th century, where workers were paid in coal money or "scrip", leaving them with no exit from the mines. It is a metaphor for the band's mountain sound as well as a throwback to their heritage and the struggles of the common man. Little Lights will be available Friday, April 7th via independent release. Website here, Facebook here.

'So Good' is the only track I have heard from the forthcoming album and excuse this moment of weakness but so far, So Good (ouch). This one of those songs that just about covers all bases, it's musically tight and polished, the vocals are feisty and passionate, the hooks are constant and dig deep. In a word, magnificent.