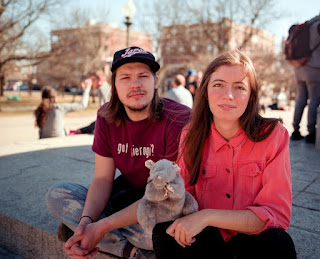 Background - Chicago's Ratboys, led by singer/guitarist Julia Steiner and guitarist Dave Sagan, will release its sophomore album entitled GN on June 30th (Topshelf Records). Drawing influence from the down-to-earth sincerity of late-90s Sheryl Crow and the confessional confidence of Kim Deal and Jenny Lewis, the songs on GN (aka ‘goodnight’) “largely detail experiences of saying goodbye, finding your way home, and then figuring out what the hell to do once you’re back,” says Steiner. The Fader, who premiered the album's first single, "Control" says "the song is a perfect example of the special, personal nature of their music.​"

GN offers a bevy of tales, laments and triumphs, which recount near-tragedies by the train tracks, crippling episodes of loneliness, remembrances of a deceased family pet with freezer burn, and on and on. The songs shift and breathe as worlds all their own, tied together by the group’s self-proclaimed ‘post-country’ sound, which combines moments of distortion and a DIY aesthetic with a devotion to simple songwriting and ties to the Americana sounds of years past.

The songs chosen to close both sides of the record – the slow-burning "Crying About the Planets’" and quizzical "Peter the Wild Boy" - unpack the respective journeys of two real people who were quite literally lost and found. ""Crying" tells the survival story of Antarctic explorer Douglas Mawson from a first-person perspective, and "Peter" reflects on the life of a feral child in Germany who was eventually adopted by the King of England," according to Steiner.

Certain personal stories - the tour adventures recapped in "GM," the struggle to learn to show affection as divulged in "Molly" - find Ratboys just as eagerly exploring subject matter that comes from within, and then illustrating the highs and lows with soaring hooks and plaintive ones. Even in the moments that lie somewhere between bliss and misery, a tension persists between Steiner’s sweet vocal delivery and Sagan’s physical, almost-off-the-hinges guitar playing that lends each song a deeper sense of colour and movement.

'Control' is an alt rock song that features melodic hooks throughout. The vocals and guitars interact with each other giving the track some additional feeling, it's likeable from the start, and by the finish it's a must listen to again, type of song. 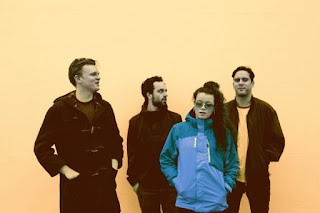 Background - Brighton based electronic pop four-piece Kudu Blue have unveiled new single ‘Drink Alone’ - the brilliant second track to be lifted from their much-anticipated debut EP, ‘Shaded’. Written, recorded, and produced entirely in one of their bedrooms in their hometown of Brighton, the upcoming EP incorporates a diverse set of influences to create something that sounds both timeless, yet refreshingly modern.

The idea behind new single ‘Drink Alone’ was conceived by singer Clementine Douglas whilst working a bar shift in their home town of Brighton: "The lyrical inspiration came a few years ago now. I was working in a pub in Brighton and we'd often have a drink during our shift. This one day I was trying to be good and decided to stick to some nutritious H2O. The girl that I was working with said "please don't make me drink alone", I thought it could be a good song premise so wrote it down, then had a pint."

The final finished recording of the track itself has been a long in the making. "The track is one of the first that we wrote as a band and has been in the set over 2 years now” the band explains. "It seems to go down well live and people often sing it back to us after the show. It's probably quite relatable, we're in England — everyone likes a drink.” Facebook here.

Our second feature this year for Kudu Blue with the newly released song 'Drink Alone'. Once again the band provide us with another stylish and beautifully constructed song that mixes genres like a cocktail, one that can be drank alone but is better shared (oops, couldn't resist)... 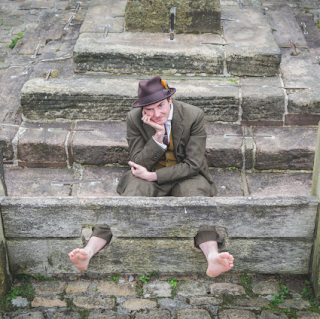 Background - Most musicians boast of exploding onto their local scene in a glittering blaze of media hype and spontaneous applause. The unassuming, unusual and enigmatic T.E. Yates however, snuck in through an open window.

His name was not on the top line of event posters but rather a discreet artist signature in the bottom corner; his first gig flyers and album covers were ones he designed for other bands not himself. He’s performed in front of huge crowds but always as a hired hand or supporting player, a multi-instrumentalist in the shadows – mandolin, banjo, harmonica, even musical saw – you may have heard him on the tracks of other artists without even knowing it. But now T.E. Yates has stepped out of the shadows, taking centre-stage with a formidable backing band (both onstage and on record) comprising members of Victorian Dad, The Bedlam Six, Ottersgear, Gorilla Riot and Honeyfeet.

Even when performing solo the man doesn’t travel light, his weird and wonderful drawings regularly making an appearance between songs, baffling and delighting audiences in equal measures.
His debut album “Silver Coins And White Feathers” is by turns moving, catchy and ambitious, brimming with influences from all across the genre spectrum, the subject matter ranging from astronomy to the Suffrage movement – a real treat for music lovers of all persuasions.

T. E. Yates' debut album 'Silver Coins and White Feathers' is released through Debt Records on Friday 26th May, with a launch party at Gullivers in Manchester’s Northern Quarter on Thursday 25th May. The launch event also features support from The Happy Soul, Aidan Smith and James G. Wilson, with a DJ set from the album’s producer Biff Roxby. Website here, Facebook here.

The opening track on the forthcoming 'Silver Coins and White Feathers' album, is entitled 'Media Machine'. The featured song gives an idea of the style you can expect from the twelve tracks that make up the LP, however this is a collection that ensures each song has individual character. If 'Media Machine' makes an impact with you, the album will not disappoint, in fact I would suggest there are plenty of stronger pieces within this collection, all in all this is worth a full listen at the very least. 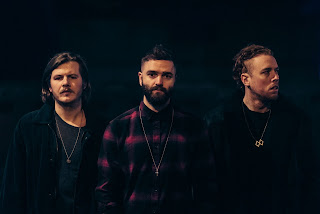 Background - London’s Mt. Wolf have experienced much since their early days as a band – line-up changes, enviable hype and interest and, most of all, a sense of expectation that has never left them. With upcoming debut album Aetherlight set to not only meet but exceed those tall expectations, today they release the emotive and thought-provoking video to the anthemic “Heavenbound”. The song owes a melodic debt to the literate, epic songcraft of Echo & The Bunnymen and The National while retaining the sky-scraping atmospherics that have become the band’s trademark, capturing the band at perhaps their most anthemic yet. Visually, the short films captures that same ethereal connection as it charts a man’s final minutes, projecting the sense that love will always be so much stronger than hate.

The director James Ayling, of Cape Films, says of the video: “I think everyone will have their own interpretation of the video. For me, it was about the idea of death acting as a force to unite people. For some death offers the chance to reflect and ask for forgiveness; for others, it provides an opportunity to find peace and the ability to forgive.”

And this from Mt. Wolf frontman and album co-producer Bassi: “'Heavenbound' deals with the different journeys entangled with death. The song is largely about letting go and moving on, while the video takes a slightly different approach: compassion, forgiveness and unconditional love for others can triumph in the face of hate and violence.”

Our first taste of Aetherlight was the 6 minute opus “The Electric” and now alongside the video for “Heavenbound” the album is now available to pre-order direct from their label CRC Music here, Facebook here.

'Heavenbound' is the third song we have featured from Mt. Wolf a band that continue to impress, with a distinct, mature and lofty sound. The video is emotive and pretty deep stuff, it does however add to a track that is heavy on meaning, and delivered with absolute beauty.