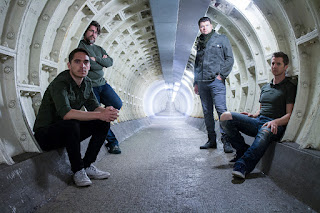 Background - A triumphant taste of the heavyweight synth-based electro that marks Akiva’s live sets, ‘M.O.D’ melds a strident musical backing to a fierce polemic on war, all brutal groove, pulsing analogue, fierce guitar licks and anthemic vocal. It is a song written about past events – namely the juxtaposition of the Ministry of Defence’s ‘Be the Best’ recruitment campaign and the funeral cortèges on the streets of Wootton Bassett – but, indicative of this Bedfordshire band’s unflinching take on the state of the world, seems increasingly relevant now, as the clouds of war gather.

“The lyrics reflect the hypocrisy of the political class sending the soldiers out against the public’s wishes, while simultaneously praising their bravery on national television,” explains frontman Dave MacKenzie. “They also highlight the pointlessness and futility of the deaths and trauma inflicted on so many soldiers.” The stunning video, its narrative arc illustrating those lyrics’ passion and despair, is the work of Berlin-based British animator Wayne McCauslin of the animation group Backyard Society. Wayne has previously worked on music videos for Crystal Fighters, Husky, Morcheeba and CHAMPS.

‘M.O.D.’ itself was recorded in Angelic Studios, Oxfordshire, before the sad death of its owner, and former Jamiroquai keyboardist, Toby Smith, earlier this year. Produced by Jake Gordon (Skepta, Emeli Sandé, Everything Everything), ‘M.O.D’ will be released on 13 October.

Alongside the perhaps anticipated touchstones of pop music excellence – the Stones, Krautrock, Madchester, the rhythmic lyricism of Kendrick Lamar and Courtney Barnett, psychedelia – Akiva are also happy to acknowledge the impact of cultural references less readily associated with rock’n’roll, namely UK current affairs programmes Newsnight and Question Time, and the trusty BBC Radio 4. For here is a band who believe that music is a medium for a message, never more so than in these troubled times. “Our songs tend to have a heavy theme of conflict and aggression running through them lyrically,” says frontman Dave MacKenzie. “Grab a beat, a bassline, add a view of the world, and you’re on the right track.”

Three quarters of Akiva – Malcolm Carter (guitar, vox), Rob Mercel (bass) and Dave Mercel (drums) – have known each other since their schooldays at a Bedfordshire comprehensive, variously soaking up the delights of warehouse raves, classic guitar riffery and grunge. Singer, guitarist and synth programmer Dave MacKenzie then arrived from England’s northwest, bringing with him a passion for breakbeat, the Madchester scene and anything with a bit of groove and swagger. Facebook here.

'M.O.D.' is a ripping mixture of synths, guitar, feisty drums and some impassioned vocals. The music video helps carry the message, this is a full throttle musical blast, that demands to be listened to. 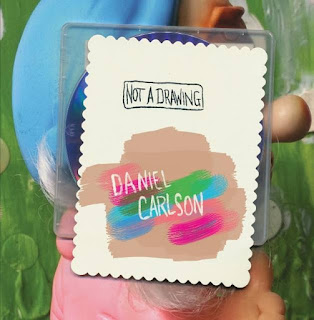 In the making of his fourth album ‘Not A Drawing’ and arguably a future classic it is worth noting the thought process behind the making of something that, in an age of very transient and mass produced ‘art’, is a wholly refreshing approach, whereupon every detail is painstakingly managed in accordance with the creation of something valuable to cherish.

From the album cover artwork, Daniel explains, “I've been working with well known, in the art world - visual artists for my covers from the start. Thus far, they've all been people who I've gotten to know in NYC. The process is this: I reach out and ask if they'd be interested in doing the art. If they agree, I give them an early version of the (still in-process) record and they're responsible for both the artwork and coming up with a title for the album. The artist this time around is Nayland Blake, whose work has been shown internationally since the 1990s. I've chosen this route because, basically, I think the cover and title - when done well - can really shape how the listener takes in the record. And I think cover art - in general - is mostly a dead art and want to remind people how considered it can be. It's getting to the point where half the reason I'm making the records is to work with these artists whose work I admire so much.”

Regarding Daniel’s always innovative and enjoyable music videos he worked on the last record ‘Me You You Me’ with Belarusian (but Amsterdam-based) video artist Maxim Tyminko, Los Angeles-based photographer and filmmaker Jim Newberry, Tokyo based artist/photographer Ichiyo Ikezaki, and also directs them himself with Daniel’s visual art collaborator Cathleen Owens. Since that record, Cathleen and Daniel have made three official videos for the ten-time Grammy nominee Meshell Ndegeocello (at Meshell's request) for her record ‘Comet Come to Me’. Website here.

We have a very welcome second song and music video from Daniel Carson this time with the track 'Problems'. Musically it is again beautifully arranged and the vocals are as melodic as the soundtrack. The music video adds to the dreamy atmosphere, which is there in abundance. 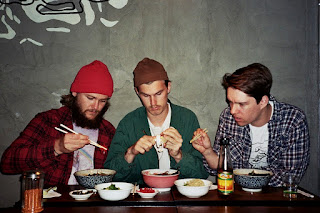 Good Boy - Fishing With A Shotgun.

Background - Barely Dressed Records is delighted to welcome fast-rising Brisbane punks Good Boy to their roster for the release of their brilliant impending EP Shirk Life, due November 10. To celebrate the signing, Good Boy have released a strange and wonderful video for first single ‘Fishing With A Shotgun’ and also shared details for their headline Australian tour.

Produced and engineered by Tim Fitz (Middle Kids), and mixed and mastered by Mikey Young (Eddy Current Suppression Ring / Total Control), ‘Fishing With A Shotgun’ is a 2 minute 30 second burst of hyper-intelligent garage punk energy. And now it comes with an equally awesome video.

Created by Australia’s pre-eminent music video auteur SPOD, the video combines 3-D animation taking aim at the absurdity and vulgarity of Pauline Hanson and right-wing politics within Australia. "Fishing With A Shotgun is a dig at the disgusting, spineless leaders that run our country, the dismal state of Australian politics and the gutless idiots too dumb and stupid to say or do anything,” says singer Rian King, “It talks about the helplessness felt by thousands of young Aussies.”

Infused with vitriol and incendiary lyrics, Fishing With A Shotgun is the first single to come from Good Boy’s brand new EP Shirk Life. Shirk Life will also be available on a limited edition 12” vinyl, packaged with their earlier standout EP Plum. You can pre-order the double EP now.

Good Boy have built a reputation for barnstorming live shows and recordings which are whip-smart and raucous. Their live energy recalls the best of Cloud Nothings, Parquet Courts and Australia’s influential Eddy Current Suppression Ring. In the last 12 months alone they have played Falls Festival, Blurst of Times, Splendour in the Grass, and toured with Skeggs, The Creases, Japandroids and Grinspoon. Facebook here.

Persuasive vocals, intriguing lyrics and delectable punk energy & attitude are carved deeply into 'Fishing With A Shotgun'. The video is another creative piece, just about keeping pace with this two & a half minute whirlwind of musical pleasure. 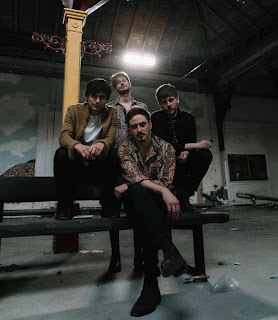 Background - Newcastle indie quartet FEVA announce themselves with debut single Blind, a blistering, no-holds-barred introduction to a band who’re already drumming up plenty of attention across the UK.

With a flurry of demos surfacing online in recent months, the Geordie newcomers have been steadily building up their live reputation with appearances at the likes of Neighbourhood Festival, Hit The North and Stockton Calling, alongside support slots with acts including Anteros, Catholic Action and The Pale White.

FEVA’s Blind is released today 18th October and will be available on all platforms. Facebook here.

The vocals are distinct and powerful giving 'Blind' some real edge from the very beginning. Not to be left out the band deliver some potent & robust rock energy and the harmonies send the song into overdrive.