AK Patterson - It's not over till they cry.

Background - AK Patterson have released the video for ‘It’s Not Over Till They Cry’, lifted from the band’s forthcoming debut EP ‘Shadows’, which is produced by Charlie Andrew (Alt J, Marika Hackman) and due out on 15 August, 2018 through East City Rockers in partnership with Andrew’s own Square Leg Records. Following a support slot for Alt J earlier this year and appearances at The Great Escape and Dot To Dot, AK Patterson have further summer festival dates lined up including Latitude and the Cambridge Folk Festival (full run of shows below). The band are sharing a new track every month in the run up to the EP’s release, with ‘It’s Not Over Till They Cry’ following previous releases ‘Shadows’ and ‘Lady Greyling’ - watch here.

Speaking about the surreal video for the slow-spooling waltz, singer Alex Patterson says; “‘It’s Not Over Till They Cry’ is about being a performer, the pressures of having to deliver something emotional and moving every time, but also the desire to do so. It's also about why people or an audience are drawn to dark melancholic things. There are a lot of references to the theatre - I love the dark underbelly the theatre has, the drama behind the curtain, the desperation in performers eyes which is often covered up by glitz and glamour.”

AK Patterson has been dubbed a ‘woman possessed’, disappearing to a place of fierce enchantment each time she sings. The foundations of Patterson’s voice - which switches from a whisper to flashes of emotion - were laid growing up in a music-obsessed household in suburban Cambridge. The likes of Jeff Buckley and Bjork were played heavily, alongside a more unpredictable love for Portugal’s traditional Fado singers. A curiosity for the unknown was deepened by travels including a period spent by Patterson living with monks in Japan.

An accomplished guitar and fiddle player, she and her bandmates, Alfie Weedon and Nat Reading, build a rich musical world. Classically trained, Weedon provides backing vocals and versatile double bass playing, having previously spent time in Senegal living with the country’s traditional Griot musical storytellers and poets. Reading’s restless multi-instrumentalism meanwhile, has led him to play everything from Balearic pop to classical guitar with the National Youth Guitar Ensemble. WEBSITE.

Our second feature for AK Patterson is 'It's not over till they cry' which follows on from 'Lady Greyling' which we shared earlier last month. Once again we are treated to some soft and quite enchanting music accompanied by intense, emotional vocals. As the drama of the song unfolds, something of a mini epic arrives both musically and with the video, just two songs in, and I am really up for the arrival of the new EP. 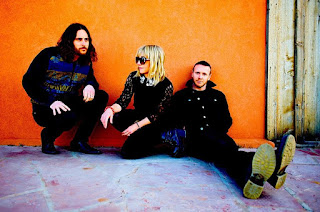 The Joy Formidable - The Wrong Side.

Background - Welsh rock trio The Joy Formidable are returning with yet another huge step forward, in the shape of upcoming fourth album “AAARTH”. Propelled by their restlessness and curiosity, the band continue to sit at the forefront of inventive and aggressive guitar music, taking what can be done with the instrument to new levels with each album. Still commanding festival mainstages around the world, and following a rapturous response to their sold-out UK live return at last week’s Robert Smith-curated Meltdown Festival, the band are now able to share full details of the album, along with brand new single “The Wrong Side”. It was premiered on Radio 1 by Huw Stephens last night said "it's brilliant isn't it... a pleasure to bring you that this evening… I’m really looking forward to seeing them at Reading & Leeds.”

The Wrong Side” follows recent single “Dance of the Lotus” and is a lurching, hulking giant of a track that aligns and progresses all of the band’s best qualities – a crushing, intense rhythm, remarkably inventive, snaking guitar work, and a soaring vocal melody – pushing things forward on an album that promises to be their most vibrant and experimental yet. Lead singer and guitarist Ritzy Bryan explains; “With life not always being that kind, you can either go down a really dark hole or you can smear yourself with colour and reverie and try to forget. That’s what we did with AAARTH; we threw ourselves into this beautiful vivacious collage of experimentation, real meets unreal, and stopped giving a fuck about things that didn’t matter, and started caring more about the things that are worth your time.”

“AAARTH” marks a transformative, near-psychedelic rebirth that channels long-held anger, soundtracking a chaotic global period of injustice and division, setting it against a deeply poignant backdrop of personal experiences and healing. Although the album came into being as the band travelled the globe and recorded in their mobile recording studio, the music intertwines the whispering hills of Wales with the otherworldly rainbow canyons of the Utah / Arizona border. “AAARTH” unites the personal with the mythical and symbolic, as Bryan continues; “We’ve definitely made a colourful, mystical collage with this record, partly because of our surroundings. Those multi-coloured sunsets & the primeval elements of nature in the Southwest – it’s emboldened our imaginations in the songwriting and the production. I love stories and seeing symbolism and meaning change with different cultures and interpretations. I see it in my lyrics, a lot of the imagery plays on being ambivalent because I’m often expressing a lot of things at once. That’s true of the title; it falls somewhere between a scream, an exaltation, a play on words, and then this motif of the bear (“arth” in Welsh) that spiritually represents strength, wisdom & healing.” WEBSITE.

Energised and gorgeously tight guitar and drums and determined yet melodic vocals ensure that 'The Wrong Side' is very quickly digging it's rhythmic hooks in deep. The song gradually increases it's intensity, this is one hard to ignore rocker. 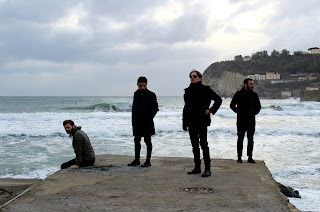 Starframes - Berlin is in love.

Background - Berlin is in love is the second single excerpt from Nicht Vergessen, the forthcoming album of Neapolitan band Starframes. Dreamy guitars, familiar melodies, magical riffs and synth pads coming from new wave tradition paint a perfect background for the main characters of the story, Friedrich and Akelei. They walk through the streets of Berlin, full of love and high thoughts and fly over the threat of war for a little while.

Just as the other tracks, Berlin is in love is directly related to the homonymous chapter of the novel, written by Raphael Bramont, voice and guitar of Starframes, that will follow the album release. The story takes place in Berlin from the 1940s up to contemporary days and gives a wide view on modern society by following the dramatic life events of main character Friederich Braun.

The video was directed and mixed by the members of the band and combines some original faces of guys playing in the streets of Berlin during 1961 with coloured and evoking flashing lights that move faster and faster as the song builds up.

Active since 2004 and based in Naples (Italy), Starframes released their debut album Street Politics in June 2009 (Mile High Music Records, UK), follow-up Ethereal Underground in January 2011 (BulbArt, IT), and self-produced EP Unwired in summer 2014. Nicht Vergessen is set to be released in autumn 2018. FACEBOOK.

'Berlin is in love' has a rich and expansive musical backdrop allowing the smooth melodic vocals to embed themselves deeper in the mix without distraction. There is plenty of personal feeling throughout the piece, and the forthcoming album should be a good one if this teaser is anything to go by. 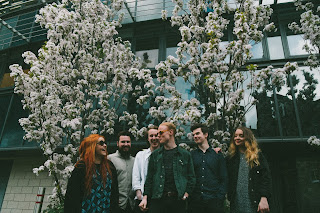 Background - With a groundswell of support greeting their arrival on the Yorkshire music scene in late 2017, Leeds-based six-piece Talkboy share their eagerly anticipated debut offering Mother, more than living up to the hype.

Combining their playful indie rock with captivating melodies and layers of vocal harmonies, Talkboy shift between euphoric walls of noise and intimately sweet soundscapes. They show a real glimpse of their unbridled potential in this first release.

Drawing immediate comparisons to the likes of The Big Moon and Alvvays, the sextet have already delivered stellar displays at Live At Leeds and Gold Sounds alongside a sold-out BBC Introducing showcase (curated by Abbie McCarthy) with more dates in the pipeline. Produced by Alex Greaves (The Orielles, The Boxing, TRASH), Talkboy’s Mother is out now and available on all digital platforms. TWITTER.

Dual vocals and fresh and refined indie rock music are the hallmark of 'Mother' a song that helps define what catchy actually means. Talkboy have something special going on here, it's uplifting and as they cleverly mix power, refrains and melody together, the result is some rather addictive music.