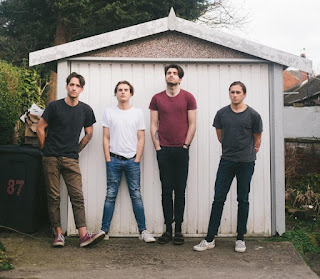 Background - Leeds quartet Far Caspian unveil new single Let’s Go Outside, the second track taken from their forthcoming debut EP, out via UK label Dance To The Radio. Following on from the majestic Holding On, which turned heads when it drifted into the online sphere’s consciousness, Let’s Go Outside reaffirms the band’s knack for hazy, infectious dream-pop.

Whilst Far Caspian have been based in Leeds since formation, frontman and guitarist Joel Johnston has only recently moved over to England from his native Ireland. This upheaval provides the basis of Let’s Go Outside’s themes.

“Although it's a pretty upbeat instrumental, the lyrics touch on depression and feeling far from something you could call home,” he states, “The whole EP is loosely based on my experiences of moving to England and feeling a disconnect to living in a new city for the first time.”

Referencing this dichotomy between themes and music with the playful self-nominated tag of ‘melanjolly’, Far Caspian’s wistful sound calls to mind the likes of Local Natives, Real Estate, Grizzly Bear or Band of Horses. However where those bands’ textures lean on the symphonic side, the lo-fi origins of the project in Johnston’s university halls, before Nath Sayers (guitar), Alessio Scozzaro (bass) and Jof Cabedo (drums) came in to complete the line-up, lends Far Caspian’s sound a comforting, insular edge.

However there’s a simpler catalyst too for the upbeat elements of the song: “We recorded and mixed the track, along with the rest of the EP in our basement. When we were doing 'Let's Go Outside' there was a crazy snow storm going on, I think it was about 1 degree in that room. That's probably why it's a bit faster than the rest of the tracks.” TWITTER.

'Let's Go Outside' is rapidly gaining some much deserved attention ahead of the bands debut EP. Far Caspian manage to mix hook laden dream pop with an upbeat feel. This is both refreshing and relaxing, with the bonus of having a level of energy that gives the song that little extra "something" to make it stand out. 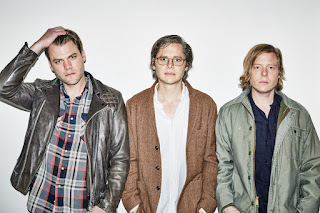 Background - Central Virginia’s band of brothers Sons of Bill release their new album 'Oh God Ma'am' on 29 June on Loose. Now, with just a few days left before the record is out, the band have shared album opener 'Sweeter, Sadder Farther Away'.

'Oh God Ma’am', Sons of Bill's latest LP is the band’s most coherent artistic statement to date-- subtle, risky, and sonically ambitious.  Recorded both in Seattle with west coast indie legend Phil Ek (Shins, Fleet Foxes) and in Nashville with Sean Sullivan (Sturgill Simpson) and mixed by Peter Katis (The National, Interpol) the album shows the Wilson brothers moving beyond the galvanic americana-rock comfort zone of previous efforts, for a more elegant and restrained sound-- a darker, and more complexly layered rock record that manages to be the band’s most emotionally intimate and sonically expansive.

Insistent, dancey rhythms and dreamy, hook-filled, pyrotechnics abound, creating a deceptively anthemic mood around songs that are in and of themselves intensely introverted.

Our third feature for Sons Of Bill in less than a couple of months tends to suggest we are already pretty keen on the bands album 'Oh God Ma’am' due out this coming Friday. So hot on the heels of 'Easier' and 'Firebird '85' we now have the latest song share 'Sweeter, Sadder, Farther'. The song exists somewhere between alt rock and something a little deeper and personal, it's also immersed in emotional feeling, and really does emphasis that this band are comfortable, outside of their comfort zone, if you get my point.