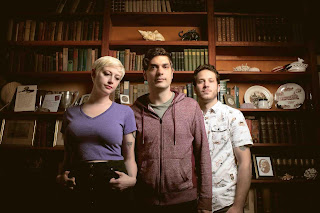 Background - Indie surf rock outfit Dentist have announced they will release their third album 'Night Swimming' via Cleopatra Records on July 20. Dentist centers around the songwriting partnership of Emily Bornemann (vocals and bass guitar) and Justin Bornemann (guitar), who had been writing songs and performing together in various ways since first meeting in 2008. The band is rounded out by Matt Hockenjos on drums.

Rightfully earning their place as one of New Jersey's buzziest bands, Dentist was named one of the top 10 bands at this year's SXSW by Mercury News and a darling of critics at NPR, Stereogum, Flood Magazine and more.

"This album was an attempt to capture all the different aspects of ourselves and create something that we would want to listen to," says Justin Bornemann. "Musically we are attracted to rawness and simplicity, but melodically we lean towards a pop aesthetic.  The lyrics tend to be focused on social anxiety, heartache and loss, but sometimes reveal love and optimism," adds Emily Bornemann. WEBSITE.

One of eleven tracks on the new 'Night Swimming' album 'Corked' provides something of an idea of what is in store. Described as indie surf rock, the emphasis for a good number of the songs is rock, often with a driving beat and some vibrant energy. Hooks and melodic arrangements are almost always present, and when the band ease of the gas, they do create some beautiful indie surf vibes. 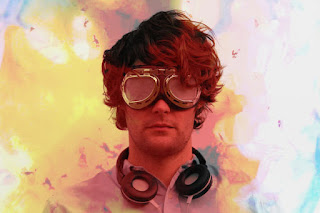 Background - "I See Sadness" is the new single from English musical visionary, producer and songwriter Paul Steel, taken from his forthcoming concept album Carousel Kites. One of the most poppy and accessible tracks on the album, Paul describes it as basically a rewrite of Pixar's Inside Out. We see our protagonist "I" coming to the end of his kaleidoscopic journey of redemption with a new lease of life. As he explains; "I went about living my days positively. When I observe the people around me I see sadness in all of them. It's not all I see but it felt good not to be alone. Sadness is a crucial part of happiness, only before I wallowed in it rather than using it as a springboard to get what I want in life."

Carousel Kites is the second album from musical visionary and songwriter Paul Steel. A mere ten years since his extraordinarily ambitious debut as a nineteen-year-old April & I, the new album sees a triumphant return with an irreverent and excessive assault of psychedelic pop - a loose concept album reflecting his rocky trajectory through the quagmires of the music industry, finding salvation through a Mr Ben-inspired shop portal. The intervening years saw him hailed as the second coming of Brian Wilson, endorsed by luminaries such as Andy Partridge from XTC, Van Dyke Parks, Stephen Kalinich and Sean Lennon, he was signed to and then unceremoniously dropped by a major label for not being commercial enough, and then finding regular work as a jobbing songwriter for the likes of Mika and Empire Of The Sun and numerous battery farmed pop sensations. His music also features in the Oscar winning film The Shape Of Water by Guillermo Del Toro.

Carousel Kites had a working title of April & II (only works written down) with a fleshed-out narrative that starts with the very same 'I' from his debut record of ten years ago, now grown up and miserable in April's absence, standing on the edge of Beachy Head about to end it all. He’d not only lost his sole source of inspiration but also his will to carry on. Pulled from the precipice Carousel Kites proceeds to tell the story of his salvation through a Mr Ben inspired fantasy shop door where he enters a kaleidoscopic Faustian nightmare encountering grotesque characters of his own making before eventually stumbling upon his own take on happiness, living forever in his dreams. FACEBOOK.

Paul Steel's musical creativity and determination to go with his heart rather than the musical industries "big boys" may have held him back commercially which is a little ironic considering the catchy and easily assessable nature of  'I See Sadness.' A gorgeous psychedelic pop song with the occasional hint of Beach Boys magic along the way, as a foretaste of 'Carousel Kites' this is one huge suggestion to check out everything past and future from this artist. 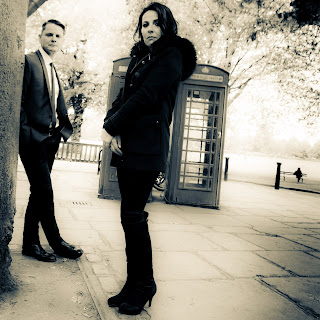 Siobhan De Maré (daughter of Tony Meehan, drummer of the Shadows) with her former band Mono entered the UK charts reaching the Top 20, while track 'Life In Mono' was used for the soundtrack of the film Great Expectations featuring Robert De Niro and Gwyneth Paltrow. Siobhan went on to form Violet Indiana with the likes of Robin Guthrie, former guitarist of Cocteau Twins.

Gary is a self-taught composer and producer; he has no musical training or knowledge, his keyboard has the notes written on them pencil and he slowly develops guitar chords from scratch! Instead of using musical theory Gary painstakingly creates a musical landscape navigated by feelings alone. It is this probing of the heart that produces music that is refreshingly genuine and instantly arresting.

The first of eleven tracks on 'Handcuffed Heart' the debut album from Swoone is 'This Bullet Never Kills'. It makes for a good indicator of the consistent quality and imagination the collection of songs brings, however as the duo tackle different musical directions and moods, expect much more, in terms of exploration and creativity, always with the emphasis on quality & passion.