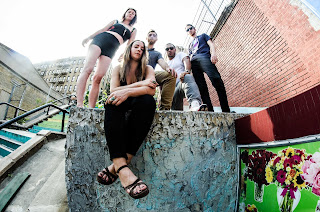 Background -  Brooks Thomas are an experimental electro-pop group based in the Bronx. Fusing elements of R&B with classic soul and electro-pop, Brooks Thomas is sharing their lead single “Good Sleep”, the first taste of their new album Poison.

The brainchild of Danny McDonald, Brooks Thomas concocts unconventional electronic R&B that's inspired by classic soul and artists like Dirty Projectors and Miguel - disparate influences that share a common thread: intensity of feeling. Exploring new ways to reach those emotional heights, Danny began programming beats, pushing Brooks Thomas's bassist Rocky Russo towards experimenting with pedals to change the textures, and having their dual singers Colleen Cadogan and Arianne Lombardi create three-part harmonies that deviate from the standard 1-3-5. What they recorded at home became a script for their live performances, where fresh colors and depths would be discovered as they translated the digital maelstrom into an organic setting. Those recordings would then get re-digitized, spliced together and warped as Danny reworked the production. Poison's opener "Fade In", for example, features the live recording of an old song Colleen wrote about Danny played backwards over a reversed saxophone sample. It ends with harmonies pulled from the penultimate song, "Gravity", unintelligible in their manipulations.

All of it lives as a creative feedback loop, the recordings affecting the live show affecting the recordings. Life was affecting the music too, of course, but not in a way Danny nor Colleen were conscious of. Though they weren't aware of it yet, these songs were about the end of their romantic relationship. Drugs and alcohol mixed with denial to shield the musicians from the truth of their own work. Looking back, they could hear it… as much as the hazy electro-R&B of "Faded" is about being lost in substance abuse, it reflects the unhealthy codependency of a souring romance. Where the David Longstreth-gone-Motown of "Hard Wind" is a breakup song written before the split, the weighty realization of the end floats in on "Gravity”.

In that way, the Poison track sequencing very clearly acts as a time-lapse of this failing relationship. If anything, it's made their music that much more impassioned. As emotional as it's been for them to live these songs again on stage, their bandmates - close friends who'd been as much a part of their relationship as the former couple themselves - have been right there with them. They've all experienced the agony of that sort of dynamic in their own lives, and getting to share it with their bandmates in such interesting, intimate fashion has only strengthened them as a band. Together, Brooks Thomas has taken everything from their uptown world -- their helter-skelter neighborhood, the flowing alcohol, their sundry influences, the prolonged heartbreak -- and distilled it into Poison, a rare, inimitable album. Stunning even as it burns, it's a toxin well worth drinking down. WEBSITE.

The tenth and final track on Brooks Thomas new album 'Poison' is 'Good Sleep', a slower paced song which combines classic soul and modern production techniques. As for the remainder of the album, I am pleased to say that you really can expect to hear considerably more variety and the promoters use of the expression "experimental" is not out of place. The band explore and create some splendid pieces, fused together with an overall sound nonetheless their ability to test boundaries results in some very exciting and hook laden material. 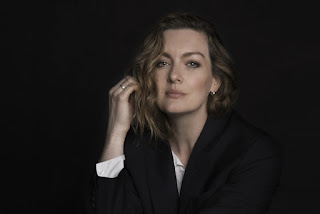 Sarah Nixey - Coming Up For Air.

Background - Sarah Nixey is delighted to announce her brand new shimmering nocturnal album Night Walks, which is due out on 5 October via Black Lead Records. “Coming Up For Air” is the first single to be taken from the record and her first release in over six years - a four-track EP comprising the single and three definitive remixes by Ön, Father and Butler Elves. “Coming Up For Air” showcases the glittering electronica and 1970s analogue recording techniques used on the new album. The song explores themes of teenage mental health illness and parental love – the antithesis of her previous band Black Box Recorder’s “Child Psychology”.

Written whilst struggling with insomnia, Night Walks is set in a metropolitan sub-world where everyone dodges the dangers of reality. The lyrics describe episodes that take place over one night, spanning several decades, in a tiny enclave, at the heart of London's bohemia. It is a modern, sophisticated album, rooted in classic record making. Nixey won over audiences as the singer of darkly glamorous pop group Black Box Recorder at the turn of the 21st Century, along with fellow band members Luke Haines (The Auteurs) and John Moore (The Jesus and Mary Chain). The band just released a box set of all three albums called Life Is Unfair via One Little Indian.

Since then, Nixey has honed her own musical voice with an eclectic solo career. Night Walks arrives seven years since her second solo album Brave Tin Soldiers, which was described by The Independent as “a thing of subtle gorgeousness,” and Uncut called it an “understated triumph.” Her debut solo album Sing, Memory, from 2007, was praised by CD UK who said; “In a time before Alison Goldfrapp and perhaps Sophie Ellis-Bextor, Sarah Nixey was the closest thing you’d get to royalty in the charts.” For this new album, Nixey made a conscious decision to move away from her previous solo work by not focusing solely on electro pop or the live instrumentation approach. This time, she wanted to use a blend of electronica and classic 1970s analogue recording.

A few years ago, Nixey had just started writing and recording again at her home studio, after taking a break from music to have her third child, but was forced to stop when she became ill.  She had entered a long phase of insomnia, which no doubt contributed to her illness, and this sleeplessness continued during her recovery period. In 2016, she began writing songs again, during the early hours of the morning. As Nixey explains; “I discovered that the best time to write songs was in the middle of the night, and without any interruptions, I also recorded the demo tracks then too.”  Her writer/producer husband Jimmy Hogarth then offered to help record the songs in the studios they own and run in North West London.

With whip smart lyrics and an ear for an adventurous avant-pop tune, it’s Sarah’s captivating voice that truly mesmerises. Alternating between a soft whisper, rhythmic talking and full-blown soprano, she manages to encapsulate inky dark nights bathed in a neon-glow, full of desperation, mystery and passion. WEBSITE.

If you desire a song that has timeless pop sensibilities, an imaginative arrangement and vocals that are enticing and just cannot be resisted then 'Coming Up For Air' is pretty much all of that. Surely that's enough to be getting on with. As a teaser for what we can look forward to in October, this is encouraging at the very least.