Favours - Maybe April - The Room In The Wood 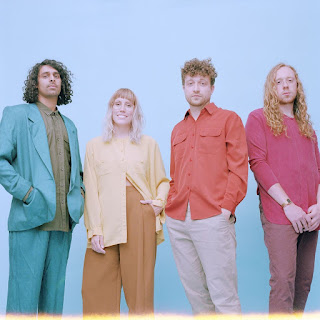 Favours - In The Night.

Background - Favours are a band that that you will never hear from…unless we need something. Born out of personal rediscovery, we sing of the delightful fantasies and harsh realities of adulthood. How fitting that we practice in an office space after hours.

“In The Night” is a ballad for those stuck in an unfulfilling cycle of repetition. Recorded with Josh Korody (Dilly Dally, Weaves) at Candle Recording Studio, it’s about escaping from the banality of the day and longing for the dreams that seem just out of reach. Dreams of star-crossed lovers destined to meet in another world, or those who do meet and cannot be together, tearing them apart at the seams.

The eerie, cult vibes of “In The Night” were brought to life in a house abandoned for over two decades. Having a blank canvas and the ability to conjure up any world we wanted allowed us to dream up the weirdest one possible. Influenced by stills from our favourite Criterion films and the Sannyasins of Oregon, we created a utopia dominated by women in baby blue.  An unsuspecting and innocent teen enters a new world where he is doomed to serve these enchantresses forever. FACEBOOK.

The videos has plenty of ingredients that sync just right with the song 'In The Night', however this is a fine musical piece that packs plenty of intrigue and atmosphere, to the point where with or without the imagery, Favours new ballad is hard to resist. 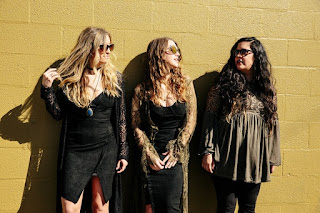 Maybe April - You Were My Young.

Background - Nashville-based indie country/Americana trio Maybe April (Alaina Stacey, Katy DuBois, Kristen Castro) have released a music video for their new track, “You Were My Young,” which is the first single from their upcoming debut album due out this fall. Wide Open Country premiered the Colling Films-directed video yesterday, stating, “Built on the trio’s folk instrumentation and airy vocals, ‘You Were My Young’ is a nostalgic look at the highs and lows of your first real love.” Of the single, Maybe April offered, “It’s a special song for us, because when we were 17 and 18 the three of us first connected over our first heartbreaks.”

Filmed partly on a high school auditorium stage and with lead actors who are both actual high school students, the video chronicles the innocent bliss of being 17 and in love, the seemingly tragic end of your last teenage summer together, and the feeling years later when you reminisce about the relationship that prepared your heart for the romances of your 20s. Paste Magazine also featured the “reflective” video, adding, “The song is warm with familiarity and Stacey’s lead vocals wind through smoothly, even as the couple in the video drifts apart...The balmy three-part harmonies give the vocals depth while creating a feeling of solidarity in the song’s lyrical journey.” Additionally, The Boot included “You Were My Young” in today’s roundup of their favorite country music videos of the week. The track is available digitally everywhere today and the video can be viewed/shared now at the link below.

A dynamic trio of impressive songwriters, vocalists, and multi-instrumentalists who share roles as frontwomen, Maybe April was recently named one of 2018’s "Rising Acts" by CMT for their “soul-stirring three-part harmonies” that are "as alluring as their lyrics." The group first met at a music industry camp in Nashville in 2012, where they penned a song together that would take them to Los Angeles for a special performance during Grammy week, along with Bonnie Raitt, Kris Kristofferson, Allen Shamblin, J.D. Souther, and Joy Williams (of the Civil Wars), among others. They have since opened for Brandy Clark and Sarah Jarosz, as well as made appearances at Pilgrimage Music Festival and IBMA's Wide Open Bluegrass Festival. WEBSITE.

The Americana genre is an expansive place where 'You Were My Young' comfortably fits, perhaps it's becoming a lazy catch all, for anything from traditional roots music through to more modern country styles (and all places in between). It's therefore easier just to focus on the fabulous vocals, harmonies and uncomplicated acoustic backdrop, all of which are delicious, at the very least. 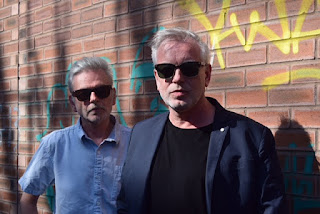 The Room In The Wood - Greedy Stars.

Background - Liverpool-based The Room in the Wood have announced 'Greedy Stars' as the second single off their self-titled debut album, complete with a new video edited by Helen Stringer. This LP represents the first time band members Paul Cavanagh and Dave Jackson have worked together since their post-punk band The Room split back in 1985. Reunited as The Room in the Wood, this past year has seen them write over 30 new songs. Together with collaborator and ace drummer Colin George Lamont, they developed and honed these ideas down to this 11-track offering.

Released via A Turntable Friend Records, this album comes hot on the trail of their 'Magical Thinking' EP. While this album is being released on vinyl, the CD and digital versions include 'Vermillion Sands' as a bonus track.

Classic cinema meets a far more modern musical style with 'Greedy Stars' a song that straddles genres, doing so with heart and feeling. Add in some thoughtful lyrical foundations, plus melodic hooks and the track makes a perfect tease for The Room In The Wood's reunion album.