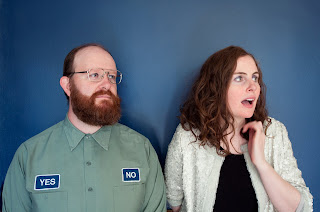 Background - Frontperson is the new project from Kathryn Calder (vocalist and keyboardist for The New Pornographers) and Mark Andrew Hamilton (who has released six albums as Woodpigeon).

The duo are pleased to share the video for “Tick - Tock (Frontrunner)” the first single from their debut album, Frontrunner, out 21 September on Calder’s own Oscar St. Records label. The video shows a track and field event shot backwards in slow motion, which is also reflected in the album artwork.

'Tick-Tock (Frontrunner)' opens with an understated vibe, the melody gently creating some refreshing hooks, and the dual vocals interact beautifully. It's alt or indie rock or something else along those lines, that it is both pleasing and rather catchy, is something of an understatement. 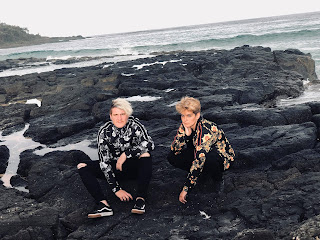 Background - Hailing from Australia, sister-brother duo, Winters End are back with a new single, "Ivy." Written in the midst of a breakup, "Ivy" is about as honest and emotive as relationship-ending anthems come.

Marissa (vocals) recounts the inescapable feeling of being torn apart from a long-term lover, facing the end of her relationship while writing "Ivy,"—and then again during recording, where she forced herself to cry in order to capture the pain she felt. It's powerful enough to make you wonder if you're going through a break up yourself. Even if you're single AF.

Along with the new single, we're proud to announce Winters End's upcoming "Dreamwalker" EP, due August 23rd, 2018. The EP was produced by Lachlan Mitchell (The Jezabels, Phil Collins, The Whitlams). Marissa wrote and recorded all vocals and melodic instruments on "DreamWalker," while Christopher wrote all percussion parts. TWITTER.

"Break Up" songs have been around for a long, long time and can be heavy going at times. 'Ivy' however mixes passionate and genuine vocals against an impressive musical backdrop. The end result is earnest, powerful and surprisingly engaging, becoming more of an anthem, than classic tearjerker material.