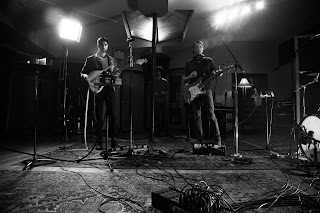 Background - Mars Motel is a dream-rock band from Brooklyn, NY presenting an explosive and immersive sound which originates from melodic elements of 1990’s Brit-Pop as well as the raw, driving rhythms of the early 2000’s NYC rock scene.

Well before the official name and creation of Mars Motel, the music began as a series of psychedelic, Brit-Pop-inspired bedroom demos written by singer/guitarist Sarik Kumar during his last year of high school. For almost 10 years, the demos were left on an old computer and almost forgotten until the summer of 2016, when Kumar rediscovered them while visiting his childhood home on Long Island.

After a couple of successful singles being released in the last two years since Mars Motel was formed, including “Green” and “Living in the Moment”, The Eclipse Sessions live EP was released in late July of this year.

Recorded on August 21, 2017 at Mission Sound during the first solar eclipse the contiguous United States saw in 38 years, and released during yet another eclipse this year, the EP features three live tracks from Mars Motel’s first wave of singles, “The Enemy”, “Green”, and “It’s Here Tonight”, as well as two unreleased B -sides (“Hit The Floor” and “City Streets”). FACEBOOK.

The Eclipse Session live version of 'Green' exudes calmness, quality and charm. The bands dream rock is confidently delivered, the musicianship is totally engaging and the melodic hooks do the rest. 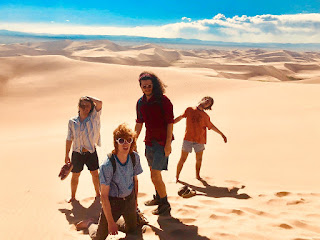 Telefones consists of Wes Salton (Guitar, Vocals), Jason Chiarella (Bass, Synthesizer), Adam Reeve (Drums, Vocals) and Jack Faulkner (Guitar, Synthesizer). They are a post-punk outfit based out of Nashville. The band was formed by longtime grade school friends Wes and Jason when they were in high-school in Atlanta. Later, they relocated to Nashville, where they picked up Jack and Adam to join the group.

The band makes eclectic punk music, with inspirations ranging from Fugazi to The Modern Lovers and The Buzzcocks. Their heavy energetic set is short, sweet and to the point, with their recorded material attempting to recreate their live, raw sound. BANDCAMP.

'Castle Factory' opens with some chunky riffs in this cut to the chase rocker. The vocals are deep in the mix, occasionally powering up and demanding to be noticed, as the band just pile on the rock grooves with a sense of angst and urgency.