April 14, 2019
The dual vocals weave around each other beautifully on Bloom's new song 'Ground', whilst the musical backdrop adds further depth. It's our forth feature for Wovoka Gentle as the trio continue to create gorgeous music, and their debut album 'Start Clanging Cymbals' is due in June! The Leisure Society have just released 'Arrivals & Departures' a double album (streaming in full below) that is packed with fine tunes and variety. 'A Nod In The Darkness' is a fabulous song from Insomniac Bears, where the vocals and musical arrangement compete for our attention throughout. 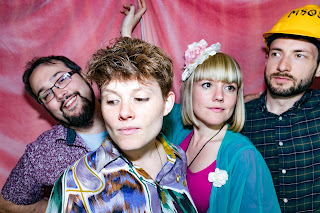 Double-A single Ground/Escape is the first single to be released from Bloom since their debut album ‘What Is Life’ (self-released in 2016) which garnered attention from tastemakers such as The Quietus, The Line of Best Fit and BBC Introducing. Both tracks deal with issues of mental health and are, as Clifton explains, “essentially a reflection of the darkest parts of ourselves”.

Releasing two singles reflects Bloom’s fascination with pairs – light/dark, masculine/feminine, yin/yang – as seen by Clifton and Cluley’s always intertwined vocals. “We can’t present ourselves in one song” Clifton explains, “It’s hard to understand one without the opposing polarity. Once you have two combining, that’s when everything starts growing and blossoming out.” This polarity is clear in the tracks, yet they complement each other. Ground’s darker pop-shades represents what the band describe as “the wordless, alien void”.  Whilst Escape rushes in with a huge driving rhythm section, a childlike vulnerability and tinges of bubble-gum pop representing “the manic, chattering infinite”, with an equally upbeat message on self-love and care: “Know yourself by letting go, Love yourself by letting go.” – Escape

Ground and Escape are produced by Ed Chivers (Fujiya & Miyagi, AK/DK) who is currently working on Bloom’s debut album planned for release later in 2019. Both tracks will be self-released digitally and on a limited run of 300 violet 7” vinyl copies. 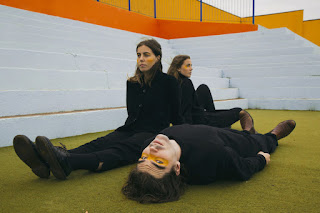 Folowing first three singles '1,000 Opera Singers Working in Starbucks', 'Peculiar Form of Sleep' and 'Sin is Crouching At Your Door', Wovoka Gentle have shared a new track taken from their debut. Another example of their limitless sonic horizons, and of their winning way with a song title, 'Tell'em Makoto!' starts with a hint of sea shanty, goes Pure Folk, then deploys a sample of gospel singer Mahalia Jackson to devastating effect.

Will from the band explains that the song was inspired by the book ‘Culture Care’ by Makoto Fujimura. He talks about Mahalia Jackson and how people like her exist on the periphery of influence; they exert influence on people who are actual influencers, and that’s the role of art in society. And Mahalia Jackson is a good allegory for him. She was next to Martin Luther King during a speech that was flagging and she shouted to him, ‘Tell them about the dream, Martin!’ And that’s how the ‘I Have A Dream’ speech started.” 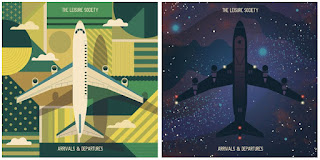 The Leisure Society release their stunning new double-album Arrivals & Departures via their own new imprint, Ego Drain Records. The new double-album has two quite distinct sides – loss and anger. "In our minds, it’s clearly a double album" the band explained. "We’ve had a sequence in mind for a while, with 8 ‘classic’ Leisure Society songs making up the first album (Arrivals) and 8 angrier, more experimental songs making up the second album (Departures)".

Going a little deeper on some of the lyrical inspiration behind the new album, Nick said: "I spent one restless night following the US election results on Christian's sofa. Before I left in the morning I scrawled on a Post-it, "Donald Trump is the American President!?!" I spent the following night drinking heavily and bashing out 'There Are No Rules Around Here'. It really seemed like anything was possible, no matter how depraved."

The album also features synth textures from Brian Eno (who championed the band from the very beginning) on 'I’ll Pay For it Now'. The band's fellow Midlander and go-to brass guy Nick Etwell leads the horn sections, with the band also enjoying a reunion with harpist Tamara who featured on The Leisure Society's second album Into The Murky Water (also joining them at The Barbican when they collaborated with The Heritage Orchestra in 2011). Heritage cellist Ben Trigg appears, alongside founding Willkommen members Marcus Hamblett, Emma Gatrill and Kristin McClement (whose debut album Christian produced a few years ago).

The album was mixed by Gareth Jones, who the band sought out based on his work on Grizzly Bear’s Veckatimest (he’s also mixed/produced Erasure, Depeche Mode, Nick Cave, Wire, These New Puritans to name a few.) Speaking on their work together the band said: "This is the first time we’ve really let go of our tight rein on mixing, and we’re incredibly pleased we did. Gareth has brought a new level of depth and energy to our music." Additional mixing work was provided by Paul Gregory - perhaps known best for his work with Lanterns On The Lake.

Arrivals & Departures is the The Leisure Society’s most ambitious and diverse record to date, charting the journey from heartbreak, to anger, to hope, in 57 lavish minutes. With their previous efforts widely praised by The Guardian, The Line Of Best Fit, Mojo, Q, The Independent and more – the band will also be touring the UK in May. 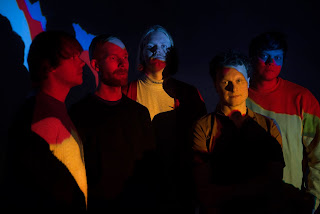 Insomniac Bears - A Nod In The Darkness.

Since the release of their debut single ‘Scenic Drives’ in 2017, Insomniac Bears have continued to deliver lyrical vulnerability, sonic experimentation and honest pop-anthems. The band is a vibrant combination of established Norwegian musicians; multi-instrumentalist Marius Ergo (Lukestar, Kaospilot & Snöras), Rumble in Rhodos-singer Thomas Bratlie Haugland, Team Me-frontman Marius Drogsås Hagen and songwriter/violinist Magnus Moriarty. Since their last release they have also included Axel Skalstad (Krokofant ++) on drums as a permanent member. The shifting combination of players has motivated the group to explore new sounds and ambitious arrangements that combine ferocious guitars and gleaming melodies that pierce through psychedelic backdrops. Perfectly marrying rock elements with pop sensibility, they travel to unexplored territory with their distinctive song-writing.

Following the release of well-recevied ‘Passing Trains’ in February of this year, ‘A Nod in the Darkness’ is the second track to come out of the studio sessions with renowned producer Lars Horntveth (Susanne Sundfør, Kimbra, A-Ha ++). The song combines vintage synthesizers, addictive hooks, and flavours of psych-pop. As songwriter Marius Hagen explains, the new single was born from the tragic loss of a close family member: “Listening back to how it turned out is not easy, but it feels 100% sincere and that’s why we decided to include it on the EP. Although the song, for me, will always be a difficult reminder of its inspiration."

Full of sincerity and vitality, ‘A Nod in the Darkness’ explores how to navigate independence in the face of heartbreak, and triumphantly advocates exercising self-acceptance.