August 20, 2019
Aweful released 'Me Me Me' a five song E.P earlier this month. A maelstrom of uncompromising rock and roll the trio deliver hook filled rock that mixes garage basics with more sonically imaginative moments and it's a blast.

A month after featuring Bjørn Tomren for the first time he returns with 'Bad Science Fiction' the title track from his album due next month. His Americana folk style is slowly paced and a little sombre on this atmospheric and beautiful song.

The Warp/The Weft were featured here with 'A Sun Filled Room' at the beginning of June, and they return with the full album (Dead Reckoning) from which that track came. I have to say this is a really good collection of material where the bands progressive folk and psychedelia is notable throughout. If you can, then listen to the whole piece, bands like this deserve to be heard, their imagination and creativity, positively demands it!

Sunscreen return for a second time this year with 'Think About You'. last time we commented that "the bands alt rock style is uncluttered, each instrument has it's space, with the vocals adding further melodic vibes". That's something they clearly have the knack for, this is fabulous song. 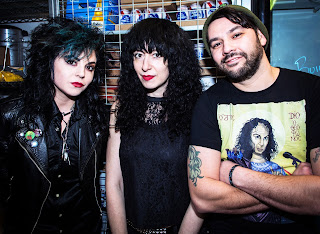 Chicago’s Aweful, which features Traci Trouble (HotLips Messiah), Lucy Dekay (Mystery Actions) and Izzy Price (Velcro Lewis Group), released their debut vinyl EP 'ME ME ME' via BeerCan Records on Friday, August 2. The band celebrated the release with a show at The Empty Bottle in Chicago and played gigs in Milwaukee and Madison, Wisconsin the weekend of the release.

"Traci Trouble is back with a brand new three-piece combo called AWEFUL, and it’s a sweeping new sound you might not expect. Joining up with Lucy Dekay (Mystery Actions) and Izzy Price (Velcro Lewis Group), this new project juts forth with a streamlined, layered vocal and a wiry guitar tone; it’s a new direction; a subdued sonic approach with slithering dynamics and cavernous depth.

Echoing solid 80’s Gun Club and Fur Bible’s chorus pedal-soaked vibes with a wall of dripping female vocals cascading over what sounds like a primitive and ominous lost Love and Rockets outtake, AWEFUL are a welcome new breath of fresh air to Chicago’s underground sounds.

Stepping aside from pandering to the pedantic tropes of endless post-punk operatives, AWEFUL draw out a more luscious and moaning fuzzed-out experience, drilling their sticky repetition into your cortex with songs that pull you in immediately. Fans of Grass Widow, Wax Idols, and The Breeders take note; this band is turning those same corners and will soon turn those same heads.” -Todd Killings 2018. 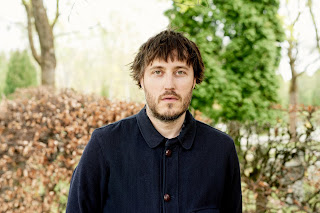 Bjørn Tomren releases the title track from his upcoming album ‘Bad Science Fiction’, which is due for release on 20th September via Norwegian powerhouse Propeller Recordings.

Inspired by an article he came across, Bjørn says of the track “I wrote the song after having read an article on truth-out.org about depressed climate-scientists grieving the human caused climate changes and the impact it has on the planet and its species. Through a blog they find some comfort in sharing their mourning's. Even though it’s quite a concrete inspiration it´s not as obvious in the lyrics."

Tomren hadn't intended it to take this long before releasing his debut but life got in the way.  ‘Life’ included navigating his native Norway from South to North numerous times – on skis, in a rowboat, walking – resulting in the world record for such crossings and a career path that includes studying Psychology, Greek and Philosophy, working in a mental hospital and working as a clown in a small family circus.

Blending traditional and avant-garde styles, the warmth of a good wool sweater and the sometimes-bleak cold of an upstate winter, the progressive folk and psychedelia that the band brings to bear is propelled by poetic lyrics and a "spirit-conjuring" lilting tenor that prompted psych-folk legend Tom Rapp (of Pearls Before Swine) to ask, "Can I have your voice when you're through with it?" 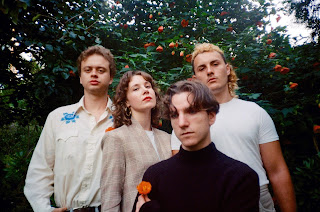 Sunscreen - Think About You.

Ahead of the release of their highly anticipated Falling In An Elevator EP this Friday via Spunk! Records, Sunscreen announce they will be hitting the road on an East Coast tour next month. Recently joining the New World Artists family, Sunscreen will embark of on a string of live dates, visiting Wollongong, Sydney, Melbourne and Brisbane, kicking off Thursday 29 September.

Produced by Simon ‘Berkfinger’ Berkelman (Philadelphia Grand Jury, Art Vs. Science), Falling In An Elevator exudes a beautiful toughness across its five tracks. Reflecting the psyche of a romantically confused young person trying to survive in the big city, the EP was written over the course of years, and explores concepts like romantic idealisation, heartache and self-possession with frank, powerful vulnerability.

Following the release of 'High Over Love', a slice of dynamic, hook-driven rock, and latest propulsive and romantically charged single, 'Think About You', Falling In An Elevator sees the band find their lush, indie-rock sound informed by a new-found confidence and lucidity. The previous singles received strong online and radio support with adds to Fbi Radio rotation, triple j play, adds to Spotify's Broad Chords and Chords + Cardigans, and the accompanying music video for 'High Over Love' added to rage.

Having recently supported the likes of DMAs, Rolling Blackouts Coastal Fever, Jen Cloher and Ali Barter on tour and taking stage at Farmer & the Owl and Grampians Music Festival, Sunscreen hit the road last month in support of 'High Over Love', performing to packed out venues in Sydney, Brisbane and Melbourne. Sunscreen prepare to do it all again, with their captivating performance and unheard new material in tow. 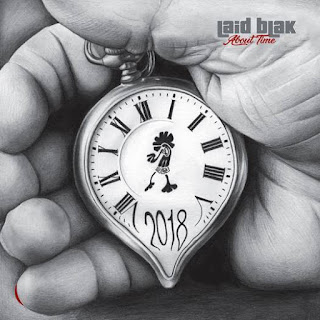 Bristol’s Laid Blak have trailed a unique path through the music jungle and picked up influential friends on the way. They don’t come much bigger these days than this key ally – Ed Sheeran. The red-haired one is a big fan, so much so that he used a section of the band’s earlier signature tune, ‘My Eyes Are Red’( 3.6 million views on You Tube) in one of his own album chart busting songs and to close his shows.

It’s a useful thing to have in the creative locker, but Laid Blak’s new second full album, ‘About Time’, more than stands on its’ own merits. Core members, DJ Bunjy and MC Joe Peng, easily use every strand of elements that turn their ears and make a musical cocktail that is heady and delicious. There’s something for everyone, regardless of age or musical taste on ‘About Time’. It comfortably straddles styles that cover a range of bases in contemporary reggae music. And most of the time it’s anything but laid back!

Sure, the breezy album opener ‘Cool Dude’ is more low-key, the band taking the brave step of introducing themselves here with a track that is programmed riddims, rattling percussion, piano, keyboards and restrained, jazzy, minimal bass! It’s – well – cool, but filled with humour, whistling, street observed lyrics, scatter-fire vocals and am easy confidence that radiates. But after that the fare on offer heats up, seeing a glorious classic dancehall style tussle on ‘Mic Man’ with the fabulously UPFUL and agile vocals from Tita Lau adding a winning dimension. The guest female singers – Tita and the equally dextrous Tanya Lacey – add a soulful and playful dimension to other up-tempo blasters like ‘It’s A Pity’( the first single), ‘Hold On’, and ‘Serious’ which head out into anything from lovers rock to a sleng teng, old school step it, rub a dub, wrap it up, mash it groove with fat horns, melodica, wailing guitar, sound system busting bass and kicking rhythms.

There is some serious business attended to in ‘Changing’, which illustrates how priorities change in life, and how in ‘No Way Out’ and the darker, more militant Aswad era take in ‘I Feel It’, that life isn’t easy. But that period of reflection is a temporary break as it’s always the contrast of celebrating life in the cheeky, chatty Smiley Culture vibe of ‘Little Bit of This’, and the Mediterranean holiday romance possibilities in ‘Fatal Attraction’. Fresh, fun and fabulous while flowing with great tunes, this is an irresistible album of the band’s distinctive brand of street soul. It’s so powerful that the band felt the need to do a rush release of it! This is music that just can’t be contained or limited. Laid Blak don’t fail in their objective to bring ‘a fun filled sunshine dance music that keeps your feet moving and your face smiling.’ So, bang on cue, spring and summer is a’ coming, and about time too! Fire up the barbeque, slap on the jerk chicken to the flames, grab an ice cold Red Stripe and put on ‘About Time’! Let the party begin!

“About Time” is released by Sugar Shack Records on Strictly Limited (500 copies) Clear Vinyl on 16th August 2019 distributed by Shellshock and available from good retailers worldwide.