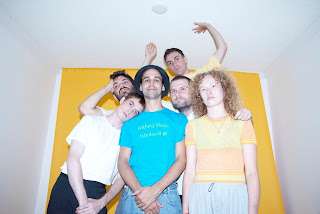 Jaunt - Delighted To Be Spoken To.

Toronto-based six-piece Jaunt are set to release their debut album All In One on April 16th. The band formed in 2016 as a casual recording project that, upon the release of their debut E.P Chat, became a local overnight sensation. Now, word is spreading with their last few singles gaining support from the likes of Lauren Laverne at BBC Radio 6 Music and Matt Wilkinson at Beats 1.

Jaunt share Delighted To Be Spoken To, the second single to be taken from their upcoming full length album, a song about resisting self-pity by developing a practice of gratitude for the fleeting, simple, joyful details of life. The accompanying video co-directed by Pia Perez & Sylvain Chaussée of Toronto filmmaking and production house tranquilo Production (formerly FUEGO!)visually reflects that sentiment. The video is the first in a series of 6 tableaus depicting mundane, yet vibrant and playful environments caught, slowed down, under a microscope, on repeat, and in reverse. In the first of the series we explore a moment with Caitlin - wavy and coiled.

Recorded over three years and engineered in collaboration with BADBADNOTGOOD drummer Alex Sowinski, this collection serves as a travelogue for the band’s growth. All In One celebrates connection, creativity, and adaptation all passed through the lens of desktop pop sensibilities and an endearingly adventurous spirit. Equal parts experimental and infectiously raw, faintly electric and distinctly exposed, the cornucopia of styles and sounds presented in All In One find itself glued together by a palpable and unique sense of understanding and friendship.

A trip down memory lane might credit Jaunt’s beginnings to an elixir of coincidence and surrendering to try something new.  Pat O’Brien, now the band’s guitarist, met future lead singer and songwriter Tom Helliwell at a Halloween party, striking a friendship that manifested across a few years of jams and shared musical creations. Somewhere along the way, Pat booked a show out of the blue, the band released their first EP, “Chat”, and Jaunt had graduated from a digital manifest of closeted collaborations to something tangible. Keyboardist Daniel Reardon entered the fold for the band’s first performance, followed closely by the addition of drummer Duncan Hood and bassist Nick Nausbaum.

Jaunt’s artistic palette, social circle, and resume developed quickly and organically, alongside their time active in the Toronto music scene. Duncan’s friendship and collaborations with Alex Sowinski intersected with Nick’s ties to the Montreal ecosystem that produced breakouts like Homeshake and Yves Jarvis; this further fostered creative community and opportunities to tour and record on top of groundwork already established by Pat, Tom and Daniel. Duncan and Nick began performing with Charlotte Day Wilson as her backing band and would cross paths with vocalist and video artist Caitlin Woelfe-O’Brien playing similar venues. A friendship was sparked, Caitlin contributed her voice to coloring the band’s second EP, Cue, and now is a full-time member of the group. By this time, Jaunt had become a well-oiled machine: a synergetic sextet fueled by earnest ambition and artistic momentum. 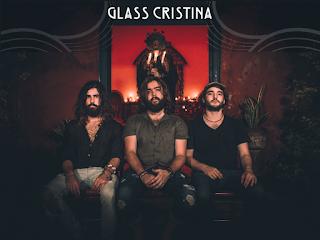 Following the success of their previous single 'Kings Of Nowhere', the latest release from Glass Cristina is 'Bali' - a hypnotizing single, fuelled with constant ambient energy. With a typically ambiguous yet stunning video, featuring the masked characters for which they have become synonymous, it’s another opportunity for audiences to watch the on-going metamorphosis of one of the world’s most exciting, imaginative bands.

Glass Cristina is the first band to be signed to Vegan Caníbal, an offshoot of renowned record label Blanco y Negro, Spain’s most successful independent record label, with over 30 years of success promoting the likes of Moby, Carl Cox and Sven Vath. The trio also recently performed at the 2019 Sziget Festival, alongside the likes of The 1975, Jungle, Twenty One Pilots, Foo Fighters, among others.

From Supermagic’s upbeat electro-soul to Icarus’ atmospheric synth bass lines, all the way to their last beachy-sax-led vibe single Tiramisu, we have seen an ever-shifting palate of colours and shades, something which will become even more apparent with the release of their album, Nudity, on 22nd May.

More than a passion project, Nudity is the result of a profound self-discovery through incessant work and composition for the band, showcasing an unrelenting evolution in both sound and identity. 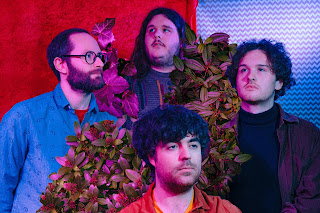 Belfast quartet Junk Drawer announce debut album ‘Ready For The House’, out via Irish indie label Art For Blind on April 24th. Channelling the likes of Pavement, Silver Jews, Beak> and more with their shapeshifting sound, the four-piece veer between slacker-rock, post-punk, krautrock and swirling psych across 7 sprawling, chaotic vignettes. The announcement comes alongside the release of motorik new single ‘Temporary Day’. Built around a propulsive bassline, drum-beat and organ drone, fuzzed out guitars poke in and out as you get locked into its meandering, off-kilter groove.

Whilst the music across the record conforms to the abstract nature of the genre influences, the themes offer a blunt catharsis. Lyrical duties are split between brothers Jake and Stevie Lennox, the fraternal link resulting in sentiment that is two sides of the same coin. Both relate, with varying viewpoints, to similar ideas of malaise & self-worth, showcasing the transience of mental illness and touching upon the fragmented, distorted narrative that it brings with it. The early/mid-Twenties personality crisis is very much a prevailing mood.

Jake’s lyrical inclination tends towards the poetic, and he’s at the helm on ‘Temporary Day’. It chronicles a struggle with sexual identity and eating disorders, and the strain of the constant internalisation of these issues on mental health. As he expands: "'Temporary Day' is about having a temporary day of relief from all the horrible feelings I usually have. The fog ascends briefly & I can think clearly for a time. Also about my face not being puffy from burst blood vessels because I hadn't thrown up in a day or two."

Jake no longer suffers from bulimia, and it is from this viewpoint of healing that the record is best understood. Though the subjects tackled are darkly personal on the whole, the writing of the album was therapeutic for the group, and at moments of warmth and colour this hope is felt. The four-piece have had a lot of acclaim in their native Ireland, becoming the first DIY act ever to win a Northern Ireland Music Award for Best Single, as well as live slots with icons in Mclusky, Built To Spill and Grandaddy. They’re also responsible for spearheading a community of Irish grassroots artists with vinyl compilation 'A Litany of Failures', which has become an institution.

Sharing instruments during sets, each member of the band is a multi-instrumentalist, and they are: Stevie Lennox (Guitar, Synth & Vocals), Jake Lennox (Guitar, Synth, Bass, Drums & Vocal), Brian Coney (Guitar & Bass) and Rory Dee (Drums, Guitar, Bass, Synth, Piano & Backing Vocals). ‘Ready For The House’ was produced by Chris Ryan (Just Mustard) and is out via Art For Blind on April 24th. New single ‘Temporary Day’ is out March 5th. 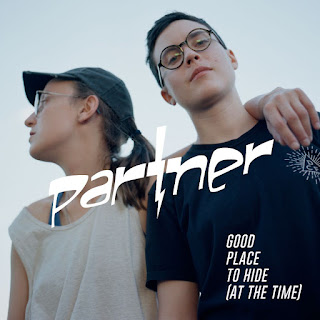 Partner - Good Place To Hide (At The Time).

“How could they see anything but the shadows if they were never allowed to move their heads?” - Plato

"You find yourself in a room with a locked door. You have always been there. It is all you have ever known. You have no reason to believe you could leave, no reason to believe you would ever want to. And then one day you hear the murmurs. Faint at first, you can’t make out the words. But their very existence tells a truth that you have always known. There is something else. And you search and search and just when you are feeling spent and the bright beam of hope has faded to a glimmer, it reveals itself to you, miraculously. The key. And so you cast aside your doubt and grin with victory. But when you slide the key in, behind the door there is another locked door. The search continues.

We wrote this song over the course of about a year. We had long wanted to explore the idea of hiding, of hidden truths. A chance phrase from our friend Alfred set this song in motion. We hope you enjoy our newest offering."
- Partner 2020

Partner, the loveable guitar shredding Canadian stoner goofballs Lucy Niles and Josée Caron are back and ready to rock, with a new single for a new decade. The band spent the end of 2019 in the studio and have some surprises for 2020. You can catch Partner on the road in the USA and at SXSW this month.