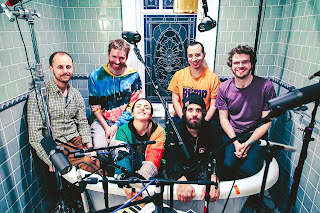 Cuddle Magic - What If I.

Cuddle Magic—the New York/Philadelphia-based chamber-pop sextet—today announced their upcoming full-length Bath is releasing on Northern Spy Records. The album's lead single "What If I" is out now and, like the full album of single takes, was recorded entirely in a bathroom nestled amid 23 microphones and the space's natural reverb.

“What if I” is the first and only song in 15 years of being a band that every member of Cuddle Magic wrote a song together," says Cuddle Magic guitarist/vocalist Benjamin Lazar Davis. "The track started when Cole Kamen-Green brought in this amazing seed that was a little loop he found in a Johann Sebastian Bach chorale.

Then Christopher McDonald joined us to work on another section that would later become the bridge. Much later, Kristin Slipp and I took out the old seed and soon had the chorus melody, & it was that night that Alec Spiegelman and David Flaherty showed up and together we would complete the lyrics to the song and put the finishing touches on the melody and form."In keeping with the spirit of the album, Cuddle Magic will be announcing a contest this week wherein fans enter to win essential bathroom supplies such as bidets, squatty potties, and toilet paper simply by following the band’s Spotify page. 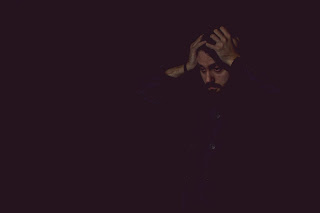 Baron Minker - Anthem of the Rich and the Bored.

A beautiful, dreamy endeavor - Baron Minker carves out a thoughtful balance between worlds both savage and serene. What results is a sound like the singularity. An underground cadre of Terminator-like cyborgs who long not for violence, but for love and existential cohesion. It’s Skynet’s art rebellion. It’s an exercise in restraint and self-indulgence. The collective dissonance the album paints comes together like a scene of androids and humans together in search of meaning amid the unfolding of a new universe.

Blending indie sheen with understated vocals and a penchant for eclectic absurdity, Baron Minker delivers liquid sonancy with vivid, imaginative landscapes that melt into deep, reflective pools of sound. This self-titled debut weaves in and out through a sparkly mix of shoegaze and 70’s psychedelia and by the time you’re out the other side, you’ve traveled lightyears. The journey across these electric cosmos stretches space and time and lands firmly on satisfying ground. Simply put, this album is a lot of fun.

The album traverses the world it creates with urgency and attentiveness. Lyrical explorations of the ever changing nature of human interactions, both within society and the self, texture the tracks. There are moments like ‘Anthem of the Rich and the Bored’ saturated with dread and hysteria that move into electro-grooves of the dystopian ‘Covered in Concrete’. Allowing itself moments of tranquility, ‘Dodgeball’ is a rippling, well placed refueling in this interplanetary journey. The ethereal and self-reflecting ‘Cocomo Hum’ blends beautiful, swirling vocals with electric smoothness that feel like a conversation between a moon and nearby satellites, while the closing track ‘Nice Chompers’ addresses despair and the hope that rises from it’s conquering. All in all, Baron Minker offers up a smooth, deep, personal, connected electricity (a connectricity, if you will) that grows more pleasant with each listen.

Stay tuned as Baron Minker announces more material leading up to his June release, and watch “  "Anthem of the Rich and the Bored,”” to get a taste of what the future holds! 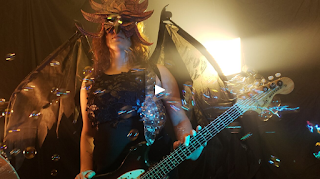 Castle Black - Dead In A Dream.

Brooklyn's Castle Black are thankful that they can share their new video for “Dead in a Dream” during a time of social isolation, when they otherwise would not be able to create a music video in quite the same way.  Their original plan to have a live show event with special video screening has been canceled, but they can still celebrate the video through online means to mark the occasion.  Bars are closed, more shows are canceled, and music fans and bands alike are adjusting to our new reality.  The video, shot last August in Brooklyn, NY, was filmed and directed by the talented Jeff Allyn Szwast, who also filmed and directed their videos for “Dark Light” and “Broken Bright Star.”

Castle Black has been steadily releasing widely praised EPs over the last several years, and are a band now known for their unique post-punk math-grunge style, relentless work ethic, intense live performance, and love of the road.   With their March tour canceled, and shows for the foreseeable future canceled, the band, and bands in general, are operating in a completely new environment.   For a band as busy and productive as Castle Black, this is a time to think of new ways to reach people, especially people who are feeling the emotional effects of social isolation.

This week the band premieres a new visual star, with their music video for "Dead in a Dream," which comes off Castle Black's EP Take Her My Life, released last November.  The EP received wide adoration and accolades from both fans and press alike.  “Their songs defy the average and are powerful and hard-hitting, always focused on hitting that trademark hook you’re waiting for.” – PureGrain Audio  “[Dead in a Dream] is a creepy, saber toothed masterpiece … It’s one of the half dozen best songs of 2019 so far …” – NY Music Daily

The video unexpectedly soars with social relevance, giving viewers an ebb and flow among various states of dream and reality.  Social isolation can bring about the need for a strong imagination, as well as a strong reliance on memories to re-create emotions that may not be easily accessible during this time.  Celent notes, “Having this video, which is like a relic of a time now seemingly so far in the past, is really special for us, because we are now living in a vastly different environment.  We could not make this video now.  We have no idea when things will be even slightly back to normal to make another video, let alone to get back to playing shows and to recording an album.  The recurring lyric in ‘Dead in a Dream’ – ‘take me back in time’ – has taken on new meaning in this new world. This video, for us, is a brief jaunt back in time, a brief reprieve from everything horrible that is happening.”

The themes in "Dead in a Dream" further explore Castle Black’s love of challenging reality and exploring dark themes in a cinematic way, as can be seen in their two other music videos also directed and filmed by Szwast, “Dark Light” and “Broken Bright Star.”  Once again, Szwast shows his artistic prowess in “Dead in a Dream” when it comes to framing, mood and elevating ambiguity, to perfectly match the music. The band chose to use masks from the very talented Carolyn Watson-Dubisch of Artisan Masks; these handmade paper maché masks lend an eeriness and a mysterious quality that completes the dream aesthetic of those scenes. 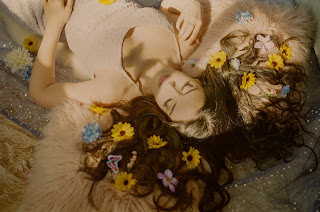 Andria Piperni - Coming Home To You.

Montreal singer-songwriter Andria Piperni blends neo-soul, R&B, and jazz to create a sound that feels both fresh and familiar. Her love for creative expression started as a young girl, often found dancing and singing to R&B sensations such as Alicia Keys and Janet Jackson.

While spending much of her time training and teaching as a dancer, scribbling lyrics in notebooks, and learning piano from her father, she developed a deep passion for storytelling and human connection through music. Inspired by both the intricacies of everyday life and the narratives of her vivid dreams, Andria’s music combines authenticity and fantasy to craft a compelling and meaningful experience.

In November 2018, her debut single Say Something made its way onto Canada’s R&B/Soul iTunes chart and garnered acclaim from EARMILK, Vents Magazine, Bong Mines, and more. Andria has since released three singles, earning spots on major Spotify playlists such as New Music Friday Canada and Just Vibing, and has collaborated with a variety of artists including writing and featuring on house DJ Andrew Pololos’ hit single Never Be The Same, which spent several weeks on Spotify’s Viral 50 Canada chart. Her music has also been played on CBC and Stingray radio stations worldwide. 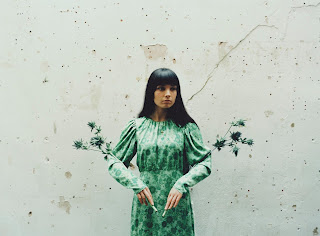 Alongside Freya’s tender vocals and thick guitar tones, it features an incessant, tribalistic driving drum beat from I Am Kloot drummer Andy Hargreaves.

Regarding the this new release, Freya says: ‘I tried to convey a ritual style sound accompanied by a tribal drumming beat which drives the track forward.

The tubular bells helped contribute towards the overall ceremonial atmosphere of the song. Lyrically, I’ve experimented with exploring the subject of talking about the darker undertones of a relationship’.