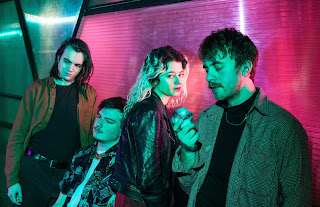 After a three year hiatus, Brooklyn psych/dance outfit Psymon Spine today returned with their new single “Milk” and announced signing with Northern Spy Records. At the time it was written, band members Noah Prebish and Sabine Holler were also playing in the dream-pop group Barrie, and had asked Barrie Lindsay to contribute vocals and lyrics to a then-instrumental “Milk.” The result was a funky, bubblegum psych-pop jam ostensibly about “aliens going to a show,” says Lindsay. A track that had started out with a darker electro-pop backbone along the lines of New Order and Art of Noise had, with Barrie’s contributions, taken on a sunniness akin to Blondie and Tom Tom Club. The song debuts Psymon Spine’s new approach to fusing huge melodic hooks with left-of-center dance sounds, and hints at still more adventurous directions to come.

Psymon Spine fuse psychedelic pop and the deep grooves of dance music, the Brooklyn electronic pop outfit's origins date back to core members Noah Prebish and Peter Spears meeting in college and finding common ground in their artistic aims and influences. Eventually, Brother Michael joined Psymon Spine, as the trio hashed out the demos for what would become their 2017 debut and continued on that aesthetic mission by becoming figures in the Brooklyn dance scene through throwing the immersive art and dance parties via their Secret Friend series. Meanwhile, Prebish's work in dream-pop band Barrie—who broke out last year with the excellent debut Happy to Be Here following a string of buzz-making singles—led him to meet singer and multi-instrumentalist Sabine Holler, who also eventually joined Psymon Spine.

Psymon Spine's glimmering melodies bear resemblance to the pop smarts of Barrie—but Psymon Spine are on a whole different journey too, embracing and exploring left-field electronic sounds ranging from disco's high-energy rhythmic breakdowns to the upward build of early techno and motorik's indelibly incessant pulse. Psymon Spine put their own loopy and addictive stamp on the sounds of the past throughout, with surprises at every turn and the type of lush synth work that could only come from such brilliant students of dance music. 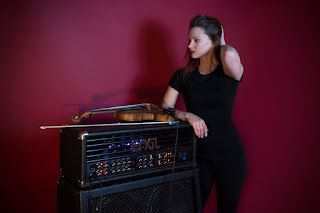 Music is a force. One that can propel revolutions, ignite revelations and guide us through our darkest hour. Perhaps there is a particular album that saved your life, changing you forever. This is the perspective and inspiration from which musician Emily Palen brings her sonic creations into fruition. Founder and frontwoman of San Francisco Bay Area power trio KnightressM1, Palen creates work that floats somewhere above the footing of several music genres, including – but not limited to – hard rock, progressive metal, hardcore, electronica, trip-hop and experimental. That said, rather than pigeonholing KnightressM1’s sound into one or two insufficient sonic slots, she chooses to simply label her musical manifestations as ~ Expanse.

KnightressM1 (KM1) in name and thematic concept is a female galactic warrior who comes to Earth to bring justice, hunt corruption and restore truth. Within universal language, M1 is code for unity. KM1 is the vessel through which Palen creates and shares her unique contributions to what is more commonly known here on earth as the music industry. “KM1 is me imagining my whole consciousness in a superhero avatar, a limitless being. A universal example of who we can all be,” she explains. 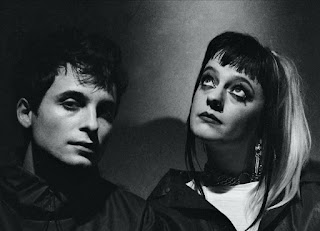 Hackney, London based duo 0171 today release their new single "Photograph", the third track to be shared from upcoming EP 'Change Nothing'. Widely praised for their futuristic, experimental approach to electronic pop, the new single follows the previously released singles “Automatic” and "Follow".

Consisting of producers/singers Joe Bedell-Brill and Georgie Hoare, 0171 are breaking down societal conundrums and complexities; all played out to a backdrop of innovative, technology-warped pop.

"Photograph" pushes those musical boundaries further once more. Aligning with contemporaries including Rina Sawayama, Kero Kero Bonito and 100 gecs, Joe and Georgie knit together soaring string sections with jittering percussion and ghostly electronics, with the duo singing about empty nostalgia: "make me unsure and small / ghost of my memory".

“Photograph is inspired by looking at a photo of an ex," the band said. "A photo that records a moment when everything seemed perfect, but now it’s a lie, and it makes you feel strange, like you can’t really remember who you were in that photo, when you loved that person. Like a life that never happened. We’ve all picked up old photos like that we find in our bedroom, that make you sit down and feel sad for a time that is lost, even if you don’t regret the relationship ending. I’m (Joe) definitely someone who spends a lot of time thinking about my past, and the feelings that I’ll never get back. Georgie’s there in this song to tell me to get over it ffs.”

Once again channelling the pop music the pair grew up with, "Photograph" brings together the wide-screen nostalgia of artists like MGMT and M83, with joyous 90's plastic-pop-inspired melodies and songwriting flair. New single “Photograph” is lifted from 0171’s forthcoming second EP ‘Change Nothing’, the follow-up to their acclaimed (Dazed, Noisey/VICE, The Fader, Loud & Quiet, The Line Of Best Fit, i-D, Gorilla vs Bear, Clash, Highsnobiety etc) debut EP ‘Red Light’.

Borne out of frustration, the new EP explores feelings of stasis, the struggle between clinging on to what brings you down, and ultimately just letting go. 0171’s new single “Photograph” is out now, released July 16th. New EP ‘Change Nothing’ is out August 14th.