The Silverbeets recently shared 'We Mattered Once Upon A Time' along with a video. The song is from their next album 'Halcyon Days' and gives a good feel for the bands desirable and distinctive indie art rock. ==== Kim Bingham hasn't wasted her lock down and along with Jolyon White has produced a fresh and highly entertaining video entitled "Sweet Irene: Escape from Lockdown" which comes from her UP! album. ==== Scenic Route To Alaska have just released 'Polarized' and the Edmonton-based indie pop trio are impressive with this powerful and hook filled song. ==== We featured 'Milk' by Psymon Spine back in July and they are back with 'Modmed' along with a video, the new track is a swirling psychedelic piece with some light disco vibes.

The Silverbeets - We Mattered Once Upon A Time.

Australian indie art rockers The Silverbeets have announced they will be releasing their 'Halcyon Days' album this autumn. Offering a taste of things to come, the quartet present the lead track 'We Matted Once Upon a Time', along with accompanying video.

With a rich dark green sound interspersed with multi-coloured stems, their non-formulaic style is distinct. Like their forthcoming 8-track full-length album, this single evoke the spirit of artists such as Can, They Might be Giants and XTC.

Formed in 2014, The Silverbeets hail from Hobart, Tasmania - the small Australian island state at the bottom of the world. This relative isolation has led the band to craft an idiosyncratic sound that borrows from luminary rock acts like Pink Floyd, The Byrds, David Bowie, Radiohead, The Pixies, Queen, Fleet Foxes, Simon & Garfunkel, Nick Cave and Neil Young, among others.

"This is a song about how government, or people in power, once treated people with some common decency, like we mattered. However all semblance of caring seems to have completely gone by the wayside and all we have left is the greed of man, the greed of those in power who know how to use it against the 99% Viva la revolution!" says frontman Farnz Cordeaux. 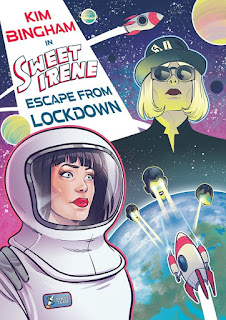 Catchy pop-rock track Sweet Irene first featured in Kim Bingham’s album “UP!”. Kim herself has had a long and diverse music career since she began in 1990, from being a member of third-wave ska group Me Mom and Morgentaler, to composing the soundtrack for TV trilogy Les Invincibles.

During lockdown, Kim and video director Jolyon White worked together in a long-distance digital collaboration to produce the video for Sweet Irene, entitling it “Sweet Irene – Escape from Lockdown”.

Kim says of the video: “The original concept was to produce a music video using only Instagram Filters. The story of the video developed into a science-fiction tale including a battle scene and victory dance.” 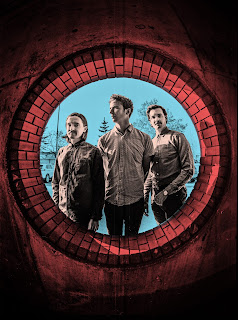 Substance and accessibility. They’re often considered opposing forces when it comes to pop music, making it all the more impressive when a band like Scenic Route to Alaska so effortlessly delivers ample doses of both.

The heralded Edmonton-based indie pop trio – Trevor Mann on lead vocals and guitar, drummer Shea Connor, and bassist Murray Wood – have worked tirelessly scaling the summit of the Canadian and international music scenes. They dropped two acclaimed LPs – 2018’s Tough Luck and 2016’s Long Walk Home – that weave memorable melodies and catchy vocals through compelling, musically-rich arrangements and earned a slew of awards and accolades on their backs. They’ve toured relentlessly across North America, Europe, and Australia and have seen their global fanbase grow exponentially with each amplified chord.

Since taking time to write and workshop new material earlier in 2019, Scenic Route to Alaska have released a pair of singles “Give a Little” in October 2019 and “Daydreaming” in Feb 2020 and played a nearly sold out tour throughout Canada. These singles will soon be featured on a limited edition 7″ vinyl.

Despite the nearly non-stop touring and unwavering determination throughout their time together, the three musicians have enjoyed every step of the journey. That was especially the case with their packed 2019 hometown performance on the main stage of the world-renowned Edmonton Folk Music Festival – a definite career highlight thus far. They’ve also racked up handfuls of awards, including a SOCAN #1 distinction for the single “Love Keeps” and a Western Canadian Music Award for Best Rock Act.

The recordings effortlessly capture the excitement of the band’s live performance, where the energy is palpable and the fun contagious. Always locked in with a syncopation that can only stem from a long collective history, the boys bounce from ballads to bangers with ease, leaving a lasting impression on any kind of audience in front of them. The band is perhaps best defined through dichotomy: young but mature, curious but collected, accessible but substantial. Such balance is all too rare in this scene, but thankfully, Scenic Route to Alaska strikes it with a style all their own. 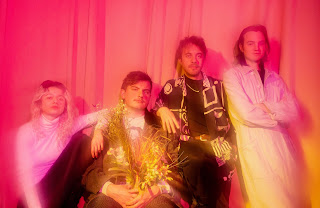 If the story of Psymon Spine in 2020 began with “Milk” featuring Barrie Lindsay (Noah and Sabine’s former bandmate), it only makes sense to follow that with “Modmed,” a song inspired by Noah and Sabine’s decision to split with Barrie and focus their energy on Psymon Spine. The lyrics to Modmed channel the complex mix of frustration, doubt, and relief that surrounded their final days in Barrie.

Featuring production and writing contributions from their friend Andrew VanWyngarden of MGMT, “Modmed” is heavily disco-inspired, fusing those sounds with a left-field pop sensibility. “Psymon Spine invited me into the studio one winter’s day and we had a fun and funky time ripping Juno basslines and dialing in lush tones,” says VanWyngarden. “I like that their dj and record digging knowledge comes through distinctly on this track.” With squishy synth lines nodding to ABBA, drums that call to mind Tom Tom Club’s “Genius of Love,” and a bass line inspired by Larry Levan, the bands’ love for classic disco and house is on full display.

Psymon Spine fuse psychedelic pop and the deep grooves of dance music, the Brooklyn electronic pop outfit's origins date back to core members Noah Prebish and Peter Spears meeting in college and finding common ground in their artistic aims and influences. Eventually, Brother Michael joined Psymon Spine, as the trio hashed out the demos for what would become their 2017 debut and continued on that aesthetic mission by becoming figures in the Brooklyn dance scene through throwing the immersive art and dance parties via their Secret Friend series. Meanwhile, Prebish's work in dream-pop band Barrie—who broke out last year with the excellent debut Happy to Be Here following a string of buzz-making singles—led him to meet singer and multi-instrumentalist Sabine Holler, who also eventually joined Psymon Spine.

Psymon Spine's glimmering melodies bear resemblance to the pop smarts of Barrie—but Psymon Spine are on a whole different journey too, embracing and exploring left-field electronic sounds ranging from disco's high-energy rhythmic breakdowns to the upward build of early techno and motorik's indelibly incessant pulse. Psymon Spine put their own loopy and addictive stamp on the sounds of the past throughout, with surprises at every turn and the type of lush synth work that could only come from such brilliant students of dance music.