Rob Kovaks first appeared here just a month ago and left a fine impression with his song 'Here in the Future' . He has followed that up with 'Fizzle' and it's another refined song that showcases both his excellent piano skills and vocals and reinforces Rob's high quality song writing ability. ===== Dr Schwamp has a new album entitled 'Tunes, Tall Tales & Tinctures' from which we have 'Dr Schwamp's Brand New Cure-All Tonic'. Despite the clear overtones of Dr John, this is a thoroughly good eleven track album, with plenty of originality throughout.

With the release of the new single, “Fizzle,” indie-rock singer-songwriter and pianist Rob Kovacs has announced his debut solo album, Let Go, to be released February 18, 2021.

Named “Best Pianist/Keyboardist” by the Cleveland Free Times, Kovacs has been widely hailed for his shape-shifting musical experimentalism, spanning history-making classical feats and audacious recreations of videogame soundtracks to crafting mesmerizing indie rock both as bandleader and now, at long last, solo artist. Kovacs has invested more than a decade in the creation of his debut solo album, a brave and bittersweet song cycle written in the years following an intensely impactful romantic relationship and then recorded over an even longer span. The album tells the story of one relationship, in chronological order. “The songs are about love, longing, loss, desire, confusion, acceptance, pain, the struggle to let go – all that fun stuff,” he states.

“Fizzle” is not only the first song on the album but also the first one written. “It was a rare case where I wrote the melody a cappella first (rather than coming up with piano part first). The melody came to me on the drive home after the first time hanging out with the girl who would ultimately inspire the whole album. I often write a song because I come upon a musical idea that catches my attention. Writing music helps to express a feeling that I may otherwise struggle to express. Through this song, I try to convey the feeling of connecting and falling for someone combined with the anxiety about that feeling and the understanding that, for whatever reason, you can’t be with that person.” 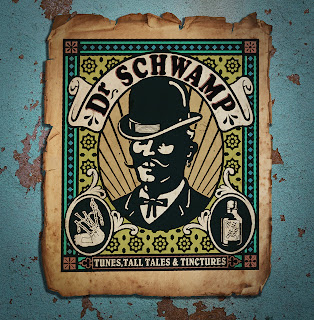 Dr Schwamp and his ensemble extravaganza have today released ‘Tunes, Tall Tales & Tinctures’, a mind contorting, sense disorientating and musically invigorating 11-track album, spinning the precarious line between restraint and excess, the ordinary and the extraordinary, betwixt Heaven and Hell… with the wondrous, magnificent and all-curing video for ‘Cure All Tonic’.

For the mysterious, peripatetic Dr Schwamp, every performance is a walk-in surgery, at which he and his highly trained acolytes serve up a thrilling "Cure-All Tonic" involving a secret recipe of blues, funk, gypsy, folk and swing all delivered with poetry, precision and power.

Dr Schwamp will enthrall you with his combo of gritty vocals, witty lyrics and dizzying facility on violin, blues harp and BAGPIPES! (We kid you not). While his highly skilled team of sonic surgeons perform complicated operations involving finely tuned instruments and fleet-fingered frettings, the album takes you on a sonic journey, uplifting and energetic, and is one to be enjoyed in full.