Samana - All One Breath.

Samana return with the lo-fi psychedelic pop of new single ‘All One Breath’.  Named by Elbow frontman Guy Garvey as his ‘Artist Of The Year’ on his BBC 6Music show, the sumptuous combination of Rebecca Rose Harris’s dulcet vocals and Franklin Mockett’s gently haunting piano can be streamed below -

Self-produced, self-recorded and self-mixed whilst holed-up in a remote part of France, ‘All One Breath’ is "a rumination of our interrelations with nature, and the impressions we carve on the world which surrounds us. Wisdom has been exchanged for naivety, which took the guise of intelligence, but the solution is buried within the ancestral part of each and every one of us".

Following the release of the 'The Spirit Moving’ EP in 2020, ‘All In One Breath’ will join recent single ‘Live For The Road’ on the forthcoming 'Melancholy Heat EP' set for release on 17th February. 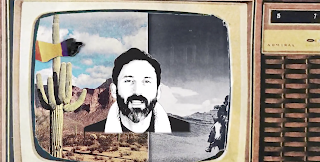 Five Videos and A Yellow Coat by Matt Costa and Minh Pham. This all started because I asked Minh (visual artist Minh Pham) if she had a coat I could borrow. Turned out to be the cover of my record. Then, when the world shut down, I started working on something else.

I turned my apartment into a sound stage, bought green screens to stage stop frame photography, and made music videos for a number of the songs on my new record with Minh. A return to my adolescence of sorts, the process was evocative of making and editing skate videos myself on VHS, syncing the right trick to the sound that would elevate it to the next level.

Music has always been visual to me. Minh was able to take the record and translate the score to images - making miniature models, domestic objects, otherworldly dancers - commingling them all to find new meaning. It all came to life before our eyes, it was an uninhibited discovery.

The "Avenal" video was molded out of restrictions in a way that built the foundation for the rest of the videos. It was our first attempt at collaborating together. We both found common ground with using analog and digital techniques in our own practices so it made sense to continue and experiment with both mediums. We tried to embrace the digital era by using the computer to enhance a collage aesthetic, but not be reliant on it. An altered reality in two dimensional form that breathes life into inanimate - sometimes overlooked, commonplace - objects and in doing so brings dreams to life. Yellow Coat explores how when faced with challenges the formerly unnoticed becomes symbolic, evoking joy and wonder.

The five videos together address the concept of being sold an idea of what love is. In these videos we tried to tap into a Rorschach of ideas to address that association with two dimensional objects then broken up and displaced. Within that we tried to evoke the sense of joy and wonder; love has limitless possibilities and means something completely different to everyone. Love can conjure a sense of loss and simultaneously a sense of hope. We tried to capture pure emotion by displacing these things like fragments of a feeling. And the memories of love like a collage arranged into shapes or grids as one tries to make sense of it all. - Matt Costa

Looking to lift your spirits naturally? Experience the music of Accolades, a young 8-piece band from Toronto with an eclectic mix of progressive rock, funk, R + B, and Jazz with lots of wind power. Their sound is best served live so you can be fully immersed in their energetic vibe.

Accolades have been making a name for themselves since their recent tour through Ontario and Eastern Canada, playing festivals and engaging their audience in ways no other band can. It&rsquo;s as if you are part of the show, not just a spectator. There are no walls with this band... everyone&rsquo;s together, everyone's performing!

Since being signed to the independent label, Akashic Rekords in early 2018 - operated by multi-award winning producer Igor Vrabac- Accolades have been hard at work in the studio on their second EP slated for Early 2021, a follow-up to their debut self-titled and self-released EP in 2016.

two singles have been released to date featuring notable talent including Alexis Baro, and Yannick Allwood. Their music is the perfect elixir to a bad day and the feel-good vibes will last long after their last song has ended.