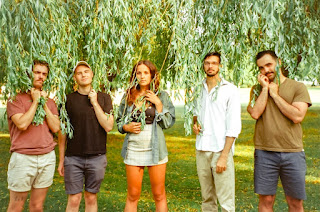 SUGARFUNGUS - Whats A Good One Worth?

SUGARFUNGUS is an indie pop/indietronica band from Vancouver, Canada that was formed remotely in 2020 during the coronavirus pandemic. The 5-piece collective describes themselves as “introverts making dance music” and their songs, like debut single “Ghosts”, evoke a certain dream-pop meets Pacific Northwest electronica sound. But SUGARFUNGUS are more than just bedroom pop, the group’s influences range from classic rock to nu-jazz.

The members of SUGARFUNGUS are lead singer Tess Meckling, bassist Alex Marr, lead guitarist Bradan Decicco, keyboardist Jackson Moore, and drummer Ivan Barbou. The name SUGARFUNGUS comes from a literal translation of Saccharomyces yeast, used in wine, beer, and bread. It is a fitting name as lab partners turned bandmates, Marr and Moore met while attending graduate school at the University of British Columbia in a wine yeast genetics lab. Friends and Capilano University jazz students/alumni, Decicco, Meckling, and Barbou were soon asked to join the group that would ultimately form SUGARFUNGUS. The band is intending to release their first EP entitled “Letting Go, Moving Still” in Winter of 2021/2022.

The EP presents a set of warm and fuzzy tracks that blend bright guitar lines and atmospheric synths, all the while punctuated by pop-driven hooks that capture the feeling of drifting in and out of a state of sweet, mushroomy bliss. Each song of the EP was written and recorded at the homes of each of the band members, who would produce their parts, share for notes, and feedback, and then send the parts to drummer and producer Ivan Barbou. “Good music presents a story and people feel it through their interpretation,” Barbou says of the band’s intentions. “We have the same vision to entertain people and get them to dance.”

For a band inspired by science, nature, and dance music, the idea of stitching pieces of different organisms together to evolve into something infinitely funkier, more brilliantly alive is an apt metaphor. With restrictions easing, SUGARFUNGUS are hopeful that their underground tendrils will soon be able to rise to the surface and break out into the light, a unique and talented bunch – now a fully formed organism ready for its arrival.

SUGARFUNGUS · What's A Used One Worth? 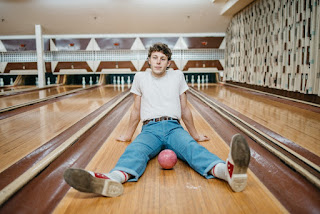 Following up the enormous acclaim he garnered for his brilliant 2019 debut album ‘The Cost Of Living’, Edmonton singer and songwriter St. Arnaud has now returned to announce the details behind his highly-anticipated follow-up LP ‘Love And The Front Lawn’, alongside the breezy new lead single ‘Catching Flies’.

Much like what we heard on his previous full-length, ‘Catching Flies’ sees the artist return in a fresh and jubilant guise. Continuing his light yet textured approach to the sweeping indie-pop sound, his newest venture makes for a wonderfully bright and joyous listen, filled with his distinctive brand of diverse instrumentation and alluring persona.

Speaking about his latest offering, he said, “Catching Flies is, somehow, St.Arnaud’s covid song, if there’s going to be one. Dropped into an inner monologue of feigning amusement and a sigh of complacency, a tone of equal parts smoky and cheeky set the scene of a twenty-something’s life and love on pause.”

Edmonton indie-pop songster St.Arnaud is a little bit of everywhere to everyone. Working alongside his brother and fellow creative, the YouTube animator GingerPale, St.Arnaud found a loving home on YouTube and Spotify with legions of eager listeners and was swept up in dozens of tour dates across Canada and the USA. His debut album was a DIY tour-de-force of fun-loving melodies overlaying themes of death, loss, and anxiety. His new album, 2022’s Love and the Front Lawn continues the sad lyrics/happy melodies framework but with a new instrumental palette. St.Arnaud has performed with Basia Bulat, Reuben and the Dark, and Lucy Rose among countless others and has performed at stages across the world including at Reeperbahn, New Colossus Festival, FOCUS Wales, and Tallinn Music Week, along with been featured on Exclaim!, BeatRoute Magazine, Indie 88, and more. 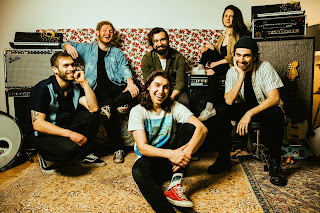 Tidal Wave - This Cost Of Life.

Tidal Wave is a 7 piece Art Rock band known for their powerful soundscapes and diverse instrumentation. Formed in 2018, the group met each other working and performing in the local live scene in Toronto.

Whether you are listening to their recorded or live material, the band meticulously layers its elements to give the music a full wall of sound with forward momentum. It is an ever present atmosphere composed of rich textures of guitars and synthesizers, with a delicate balance between soaring string lines and strong vocal melodies.

The name of the band rather accurately depicts the overall tone of an unrelenting unstoppable force. Tidal Wave evokes the melodic elements of indie rock bands like Arcade Fire, while creating compelling production-heavy ambient synth and guitar textures comparable to Godspeed! You Black Emperor and My Bloody Valentine. In 2021 they released their debut self-titled EP.

Tidal Wave · This Cost Of Life 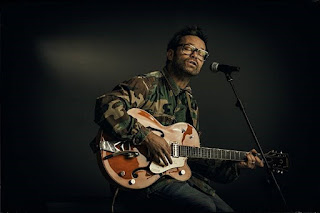 Ewan MacFarlane’s debut solo album “Always Everlong” was released in October 2021 to much acclaim, as the former Grim Northern Social and Apollo 440 frontman set out his stall as a solo artist with a collection of finely crafted rock ‘n’ roll songs that capture the unnameable feeling all great musicians elicit when you find yourself in the presence of something truly special.

The album came about when MacFarlane challenged himself mid lockdown to write a tune a day to upload to YouTube each evening, these songs tell tales of tension with pledges of eternal love. An expression of his hopes and fears, “Always Everlong” is emboldened by a personable approach to classic rock penmanship as Ewan bares his soul by putting pen to paper, unafraid of the consequences. Honouring the revered rock’n’roll songbooks of Bowie, Petty, and Springsteen, it plots the works of those making up the soundtrack to his own life, who have always called, enthralled, and entranced him.

Like all great albums, music lovers will be revisiting “Always Everlong” for years to come and with this in mind, MacFarlane has announced the digital release of a deluxe “Always Everlong” package to come out in February 2022. Including extra rarities and treasures, the new digital release celebrates the successes of the album’s initial release and as ripples of the initial “Always Everlong” release still expand out into the world, the deluxe edition gives those that may have overlooked this future classic another reason to dive right in and check it out.

On the deluxe release, Ewan said, “we had so many great songs that we left out first time around. Then when the reaction to the album was so strong, it seemed like the sensible thing to do was to release an expanded version of the album.”

The new package includes 7 extra tracks in total, and among them BBC Radio Scotland afternoon show single of the week “This Year” and new single “Honey”. “Honey” represents the first time Ewan has revisited his back catalogue, being a recording of a song that was originally written and released via his band The Grim Northern Social back in 2003. “I’m really proud of that period of my career, the success we had and the songs we released,” says Ewan “Honey is about being so much in love that you can taste it. It’s about wanting someone and fantasising what it would be like to have it all on your terms, which is of course is impossible. None the less, its ok to dream!”