London 7-piece For Breakfast today release new single "Orfordness Lighthouse", the second track to be lifted from new EP 'Trapped in the Big Room' out 20th May via Glasshouse Records. The new EP follows the band's debut EP ‘Songs in the Key of O’, released in June 2020 to fervent praise from The Quietus, Loud and Quiet, So Young Magazine amongst others.

Emerging in their current form in 2019 in North London after a string of line-up changes, For Breakfast pull together seven musicians from varying musical backgrounds, bolting together elements of dream pop, post-rock, jazz, noise rock and psychedelia together to form an aural experience like no other.

New single "Orfordness Lighthouse" along with forthcoming EP 'Trapped in the Big Room' were recorded on a decommissioned Cold War airbase in Suffolk in the Autumn of 2021. A crescendo of horns, flutes and trip-hop imbued post-rock, For Breakfast execute the marriage of influences with aplomb; "Portishead with a splash of Cocteau Twins and Mogwai to taste" – the band suggest.

Speaking on the release of the new track, vocalist Maya and bassist Sam commented:

Maya: "As with most of our songs, I didn’t write the lyrics to Orfordness Lighthouse with a specific meaning in mind. They came about in the same way as most of the music - on the spot in our rehearsal space. They’re there for the feeling and the sound of the words more than a narrative or anything, but looking back on them there’s a sense of holding and being held, tension and release that is a reaction to the music and the journey of the song."

Sam: "Orfordness Lighthouse went through a few iterations before becoming what it is now. It was built around a chord progression and piano melody that Maya brought in - around the time that we were going off to record the first EP we’d made it into a Portishead-esque drifty trip hop tune, but we felt it wasn’t quite there yet. We came back to it during one of the first lockdowns and beefed it up a bit - we made some melodic tweaks to the first half, wrote the climactic end section, and couldn’t resist closing with some cute gang vocals." 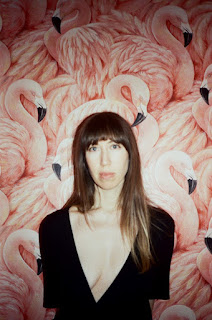 Australian songwriter Jo Schornikow (now based in Nashville) releases “Plaster,” the third single from her forthcoming album ALTAR out May 20th. Both of her wrists were broken and bandaged in plaster when she wrote the song, which is about the idea of magic in plain sight, and the dual giddiness and loneliness of moving to the other side of the world.

The song, which follows “Visions” and “Lose Yr Love” is accompanied by a video directed by Joshua Shoemaker and filmed at the East Nashville church wheSchornikow is the organist. The video culminates with Schornikow at a decorated altar with pieces from her life: a life that led her from jazz bars to church organs, performing on tour around the world with partner Matthew Houck and Phosphorescent, and home to their two children. It recalls her personal altar that gave title to the forthcoming album.

ALTAR was recorded between Nashville and Melbourne and is co-produced by Schornikow and Selwyn Cozens. The nine track album centers Jo’s songwriting, which Gorilla Vs Bear proclaimed “smouldering” and her piano playing, which Pitchfork has praised as “sensitive [and] impressionistic.” It follows 2019’s Secret Weapon, which Rolling Stone hailed as “excellent.”

ALTAR is a joyously vulnerable pronouncement of her protean spirit. The seeds of this album were tended to by Jo throughout loud, intense years of heavy touring, and quiet, intense years of early motherhood, growing through whatever cracks were found in those foundations.

How did stop-you-in-your-tracks vocalist and songwriter Christine Sweeney go from singing along with R&B radio and tapes by Whitney Houston, Mariah Carey, and Destiny’s Child as a kid; to choice slots at the Connecticut Folk Fest and Falcon Ridge Folk Fest, WFUV DJ John Platt’s tastemaker On Your Radar concert series, on bills with Graham Parker and Jill Sobule, and in a Paste Magazine 2021 session?

She sets the scene: “I had some cassettes and would also tape songs from the radio. I would play them over and over again, focusing in on singing to a small part of the song. Rewind, play, repeat.” To her, the R&B vocal influence isn’t unnatural in the folk setting. The result of this influence reminds her fans of Susan Tedeschi, Brandi Carlile, Sheryl Crow, KT Tunstall, or Grace Potter with music that grooves and rocks but also tells her story.

“I was an alto voice part. I really appreciated the alto harmonies. They’re always complex and stanky. We’ve got the nasty dissonant harmony notes because they’re so nice in the middle,” Christine says. She would go on to refine her voice as well as study music theory and songwriting at SUNY New Paltz.

Her new album ‘Heart In a Hurry’ is a culmination of this pairing of folk and soul, with generous dashes of blues, pop, Americana, and yes, R&B, in sharp, open-hearted new songs, some drawn from life lessons learned the hard way and shared with her listeners. “I hope by hearing some of the more personal details or the more raw emotional descriptions in the songs like in ‘Anywhere Anyway’ and ‘Down to the River’ and ‘Denial,’ that the listener will be able to connect with their own experience. I feel like these songs talk a lot about states of feeling, either abandoned or confused or tired of trying. I hope that whoever might need that message, that they take it as a sign that other people feel like this, too. They’re not alone,” she says. The message has connected with her fans, who have told her they can relate with things going on in their own lives. She’s had fans approach her after concerts to tell her hearing her song helped with something they were experiencing. Even when telling a deeply personal story, Christine has the ability to tap into universal feelings. ‘Heart In a Hurry’ tells a tale of perseverance.