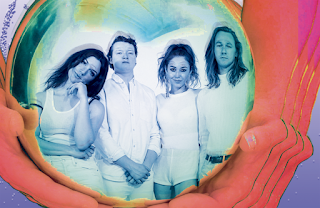 Flight Attendant recently announced their upcoming debut full length will be out on September 30th and they are heading out for tour dates in the US and Europe. "The debut album by Flight Attendant stands as a fine testament to the development of a exciting new band who have adopted such an eclectic mix of sounds and styles from their home in Nashville." say Louder Than War of the upcoming LP.

Flight Attendant belongs to that breed of rock bands made in Nashville, where their sound is nothing less than a sonic unicorn. Blending sounds of grunge with power-pop hooks, viola and light synth textures, they have begun to create a hypnotic sound and energy all of their own.

Flight Attendant belongs to that breed of rock bands made in Nashville, where their sound is nothing less than a sonic unicorn. Blending sounds of grunge with power-pop hooks, viola and light synth textures, they have begun to create a hypnotic sound and energy all of their own.

The group met through many shared interests, friend circles and glasses of wine. Karalyne (Lead Vocals, Keys, certified Sommelier, originally from Kansas City, Kansas) met Vinny Maniscalco (Vocals, Guitar, award-winning bartender, originally from Boston, Massachusetts) while bartending together at Nashville restaurant 5th & Taylor where Nikki Christie (Vocals, Viola, great at drinking wine, originally from Los Angeles, California) joined in too. It didn’t take many nights of cocktail making and wine tasting before the band formed. With the addition of drummer, and long time drinking buddy Derek Sprague (drums, lager lover and also from Boston, Massachusetts) the lineup was complete. Together the group has released a collection of singles including pulsating grooves like “Man of Chaos,” which was described by numerous media outlets as one of the best singles of 2020. 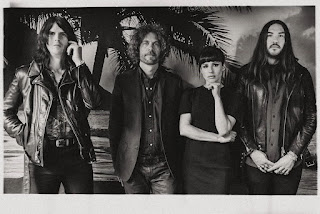 Sohodolls - Letter To My Ex (Thank You, Goodbye).

London's influential electro-rockers Sohodolls are back! After being out of the limelight for more than a decade, a globally enforced lockdown revived one of their classics ‘Bang Bang Bang Bang’ into an unexpected viral TikTok hit among the Gen Z glitterati, which has inspired the band to reform and release some stunning new music.

Musically, ‘Letter To My Ex (Thank You, Goodbye)’ may take its cues from ‘Bang Bang Bang Bang’, however, Maya von Doll’s return can only be described as a perfect pop anthem for any break up. Blending old school beats and new wave synths with that sauciest of Britpop wit, alongside hook laden singalong parts, it is a poignant single to capture her, and some of her band members’ actual real life present divorce situations as only they can.

No stranger to cult following and success, Sohodolls debut album in the naughties ‘Ribbed Music for the Numb Generation’ has always gone down well with a young crowd, having been the sound of one of ‘Gossip Girl’s’ most famous striptease scenes from Leighton Meester to writing pop bangers with the likes of Charli XCX and then this unexpected viral revival in 2021, Maya von Doll recalls,

“One morning I received a flurry of frantic texts from friends, saying Madonna has just shared and tagged your song, I was in the middle of a house move, no internet so I had no idea, but it was crazy.” 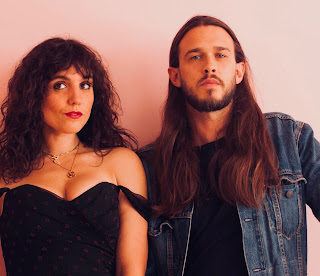 Blue Violet are back with news of a new EP, single and a spread of Scottish tour dates this Autumn.

Directly following their debut album ‘Late Night Calls’ (released in the Spring of 2022), the band have been busily working towards its successor in the shape of a new EP entitled: 'Love, Hate & Forgiveness’. Confirmed for release on 21st October, the four track release will feature two acoustic reworkings of ‘Late Night Calls’ classics, plus two brand new offerings including the new single “Favourite Jeans.”

While described by Blue Violet as “a continuation of themes, both sonically and lyrically, that we explored on our debut album”, the songs of the ‘Love, Hate & Forgiveness’ EP mark a distinctly different writing chapter for the duo. Whereas the songs heard on their debut album ‘Late Night Calls’ date back to a prolific month-long session in 2019 with producer Rob Ellis (Anna Calvi, Marianne Faithful, PJ Harvey) at Devon’s Middle Farm Studios; their upcoming material is a glimpse of how the pair spent the inescapable lockdown of the following year.

“For all of the chaos and hardships that Covid brought to the world it also provide ample time for people to be creative” reflects singer Sarah Gotley of the ‘Love, Hate & Forgiveness’ EP. “So although we only released our debut album in April this year we wanted to bring out some of the music that we'd been working on in that time”.

Songs of social distancing and hand-sanitising, these are thankfully not. Instead the duo used the time as an opportunity to step away from the humdrum of the everyday and into the imaginative, character-driven worlds Blue Violet so capably envision. The material of ‘Love, Hate & Forgiveness’ EP is the first to emerge from these sessions and finds them expanding their universe.

After impressing with her debut single ‘Say Something’ earlier this year, 16-year-old Ella Tiritiello has returned with her gorgeous follow up single, ‘Take it Personal’.

Take it Personal comes as a reminder that honesty is always the best policy. Sharing more Ella explained:‘The inspiration came from how you often say to people to not take it personal and “it’s not you, it’s me”, but maybe sometimes it’s better to just keep it straight.’

Despite only just turning 16, Ella Tiritiello has already put herself firmly on the map. With her debut single ‘Say Something’ already at over a quarter of a million streams and a knock-out live performance at the prestigious ‘Brilliant Minds’, this year has already been a big one for the rising teenager.

Born in Kristianstad, a small town in the south of Sweden, Ella Tiritiello was raised by music lovers on a potent diet of powerhouses including the likes of Diana Ross, Adele and Sia “I loved to sing their songs in my room, but I never wanted anyone to hear, mostly because of my stage fright. I couldn’t see myself stand in front of people and sing.”

Now Ella stands as a young artist who’s already overcome her biggest fear. In 2021 Ella was selected by the Tim Bergling Foundation (Avicii’s father) to sing, perform and release Avicii’s ‘For A Better Day’ alongside the Royal Stockholm Philharmonic Orchestra, she rose to the challenge and performed to 16,000 people. A huge undertaking for any artist, let alone a 14 year old with stage fright.

Her effortless vocal talents and authentic stage presence instantly won over the crowd as her confidence blossomed before their eyes.

Kalila Badali is a singer, songwriter, and psychotherapist based in Toronto. Aside from her solo project, Kalila is a lead vocalist and songwriter of the indie band, Shy By Shy. As an individual with a learning disability, writing music became an important source of self-efficacy and self-expression for Kalila. By teaching herself guitar and songwriting, she was able to express her understanding of the world from the perspective of a neurodivergent, learning-disabled person.

The song “No Eye Contact” and the Panacea EP is meant to be an expression of the sense of helplessness, hope, and longing for deep understanding that can come from having mental illness and disability while servicing this same population’s mental health needs. Kalila’s hope is to promote acceptance for the diversity of brains that have always been present and often misunderstood through her music and her practice as a therapist.

“No Eye Contact” is written about one of Kalila’s online dating experiences, and the absurdity of thinking you have a connection with someone and then finding that the so-called connection just exists in this weird online world of text and not so much in real life. As a therapist, Kalila also hears this same kind of story over and over again with her clients; it really is a universal experience!

“Something I keep returning to about the title is how it plays into neurodivergence and how significant eye contact is a tough subject for many neurodivergent people,” says Kalila. “Whether it’s giving too much or not enough, people are often making commentary about what eye contact communicates. In this song, I was also trying to reconcile with my own panicked response to having no eye contact while being present in person, but also in how much more projection and fantasy could take place when there was no eye contact at all during the online interactions.”
Kalila Badali · No Eye Contact