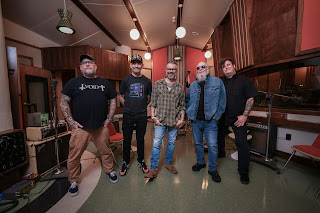 Memphis rock/alt-country band Lucero releases their new single “Raining for Weeks” from the upcoming album Should’ve Learned by Now, out February 24 via Liberty & Lament/Thirty Tigers. With a soulful piano and a plucky acoustic guitar, the song offers a meditative rumination on mistakes made and love lost. It is accompanied by a music video featured this morning at Garden & Gun, who said the “ballad-like melancholy falls into equilibrium over jaunty piano, Nichols’s tenacious vocals, and old-school guitar drones.”

“This was a new guitar part that I wrote while playing guitar and chasing my daughter around the basement,” explains bandleader Ben Nichols. “It reminded me of something I might hear in a Wes Anderson film. Maybe one was on TV while we were playing. For such a simple little song, it has some of my favorite lyrics on the album, suggesting the narrator has been completely unaware of the consequences of his actions.”

Should’ve Learned by Now is a reflection of a band that knows itself. Since forming in Memphis in the late 90’s, Lucero has evolved and embraced everything from southern rock to Stax-inspired Memphis soul, while maintaining their distinctive sonic foundations. After exploring darker, more atmospheric landscapes on their two previous releases, the band’s 12th studio album finds them returning to their punchy driving rhythms and punk-rooted guitar licks. The record is already garnering early acclaim with Lucero’s two previous singles – “One Last F.U.,” which Rolling Stone declared “has the defiant, sneering energy of Lucero’s loudest recordings,” and “Buy a Little Time,” which BrooklynVegan said “finds them embracing fuzzed-out, anthemic heartland rock, sounding like Tom Petty jamming with Crazy Horse but in the way that only Lucero can.” 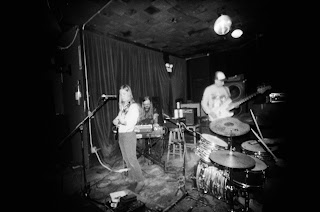 Writing about Doom Flower for a feature in the Chicago Tribune last month, Britt Julious says: "There’s a ferocity in their decision making, from their controlled notes on the guitar to their minimalist percussion to Price’s soft, yet emotionally piercing vocals. Moody and evocative, Doom Flower has landed on a formula that should surely make them one of the city’s newest breakout successes."

The next single from Doom Flower's forthcoming full-length "is about choosing to keep going. The candles represent rotations. The chime-like guitar sound replaces the word 'time.'"

I've been really moved by this music and have found it easy to forget that I've already listened through the full-length once, twice, three times. Hypnotically beautiful and effortlessly cool, Doom Flower's Limestone Ritual recalls early Cat Power and Mirah and Bowery Electric but there's more than nostalgia at play here. Jess Price, Bobby Burg, and Matt Lemke expertly and effortlessly use this familiar mode to get their hypnotically beautiful songs into our minds. But it's then impossible not to get to know them for what they are: effortlessly cool, totally dialed in and completely satisfying.

Everyone involved here has significant history in the indie world. Bobby's a longtime member of Joan of Arc and Make Believe and of course his own project Love of Everything; Jess has been fronting Campdogzz since 2013; Matt's got Wedding Dress with Chris from Chin Up Chin Up; and Areif Sless-Kitain has drummed for The Eternals with Damon Locks and Brokeback with Doug McCombs.

The full-length drops next month on January 6th and will be available as a limited cassette and download via 'record label' and on all streaming platforms. 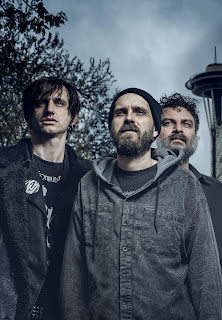 Part-inspired by the seminal Madchester movement of the late 80s and 90s, the track is now accompanied by suitably vintage-styled visuals. Directed by New Visions’ Dylan Brannigan, the “Boo” music video arrives like a lost cut from the Granada music show, So It Goes… but with a supernatural twist.

Speaking about the concepts behind the video, L.G. Galleon of Dead Leaf Echo explains: “The Boo video intensifies the viewer’s visions of paranoia and fear about losing a loved one as they are trapped within a television screen forever set to watch themselves on repeat."

An indie-dance anthem with a deliberately retro feel, the track is intended as a tribute to the late Denise Johnson (Primal Scream / New Order), the Mancunion powerhouse vocalist who blessed some of the greatest Madchester-era records with her inimitable character. Scratch beneath its Hacienda-primed sound though and you’ll find an altogether darker and paranoid lyrical substrata. As L.G. Galleon reflects:

“Boo was written five years ago when I was pressed by my girlfriend at the time to write a joke “Manchester” song with a hook. It quickly morphed into a partial ode to Denise Johnson who passed away during the pandemic and also into a creepy Halloween song about surveillance, discovery and scaring your “Boo” with the truth about all your hidden secrets.”