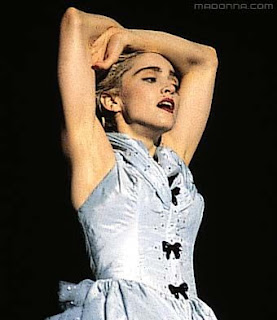 This is Madonna live on the 1990 Blond Ambition Tour.

This particular show from the 31st July 1990 was performed at the Estadi Olímpic, Barcelona, Spain, and featured a seven minutes long extravagant fireworks display after the show.
The show apparently had a few glitches.
Numerous technical mistakes included Madonna forgetting part of the lyrics to "Sooner or Later" and "Material Girl," and getting her monocle caught on her head-microphone at the beginning of "Express Yourself".

Not realizing that her headset microphone was still live as she exited the stage after "Where's the Party," resulted in her command at a backstage crew member to "Get the f### out of my f#####' way" and complaints about the oppressive heat to be broadcast to the audience while the dancers performed during the closing of the number.
Also, at the end of "Holiday" a man came on stage and put a shirt on Madonna to promote a product as Madonna commented "Anybody gonna arrest this man?"
Later, in the beginning of "Keep It Together", she told her audience, "Strange people walk on my stage, they put s### on me, I can't hear myself...I'd like to f####g kill somebody."
All this and the fact the overall tour was controversial in its own right - Marvelous stuff !!!

Sound quality: The show was taped and aired on television in Europe and Australia, and this is a pristine audio stereo soundboard copy of the show for your pleasure.

sleepygnat said…
Thank you so much. looking forward to listening to the Dresden Dolls.
12 October 2010 at 20:50