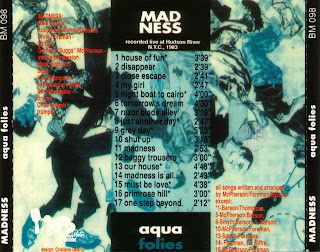 This is a classic Madness bootleg originally circulated on CD as 'Aqua Folies' no doubt, as a result of the concert taking place at 'The Pier', Hudson River, New York City, USA.

Genre: Two Tone (how many record labels becomes a genre?), English Ska, OK it's great pop, that stands the test of time.

Set: Full set including encores, nicely edited as mentioned above.

Comments: I have only seen Madness live once, (in London, UK), and much later on than this.

I was absolutely 'blown away' by the fun, musical quality, showmanship, energy, and commitment, along with the fact that the audience very soon became a part of the whole event.

This concert does justice to that memory. There's probably a little more adrenalin and raw talent, and a tad less 'audience interaction' than they get on home soil, but all in all, it confirms to me they have been a consistently great band since those early, ground breaking days in the latter 1970's.

Madness albums can be purchased at Amazon.co.uk - Madness

Beehive Candy said…
Copy and paste the links below to your browser:

Please feed back any problems by email to: perfectradio.btinternet.com