The Pretenders - Live In Amsterdam 1980 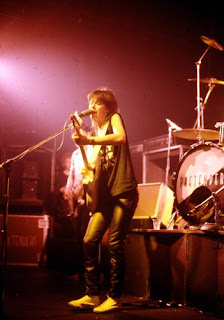 I remember Chrissie Hynde from her days writing for the NME (New Musical Express - UK weekly publication) back in the mid 1970's.

It was only a matter of time before her musical ambitions came to fruition, and after a couple of false starts, she eventually surfaced in late 1978 with a very up and ready band called The Pretenders.

Their debut album remains a firm favorite of mine, it has that timeless feel that great songs and albums have, no logical reason and maybe just a state of mind.

To come across a live concert boot (31st May 1980 to be precise) from that era obviously made my day.

Comments: It is a sad rock'n'roll fact that drugs really can hurt any individual and/or band, even in their prime, as was the case with The Pretenders.

A concise and realistic appraisal from Wikipedia reads as follows:

At this early peak of the band's success and potential, Hynde kicked ex-lover Pete Farndon out of the group for ongoing drug problems. Two days later, 16 June 1982, Honeyman-Scott was dead of a cocaine overdose. While the band tried to regroup in the following year, Farndon overdosed on heroin and died on 14 April 1983.

It tends to put the whole rock - drugs thing in perspective, and it is a delight that The Pretenders did regroup back then, and are still touring throughout 2009 (worth seeing if you get a chance).

Anonymous said…
I remember seeing The Pretenders in 1979 at the Bilzen Festival in Belgium, amongst other beginners like Cure, Police, Bram Tchaikovski and others...

After a while we discovered that the singer who was singing something about stop your sobbing was indeed a girl... It was only several months later that I fell in love with the beautiful Chrissie as we all did as teenagers in those times...