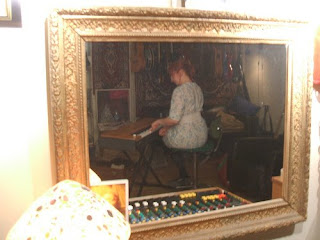 I still read several of the UK music press publications every month, and have built up a personal list of music sites, that have reliably led me to discover highly enjoyable new music on a regular basis.

Along with that, one of the perks of running this music website, is the material from promoters, agencies, and bands themselves, that come this way.

I select new music to share on a simple criteria, either I like it (another perk), it complements the live material, or finally, it adds to the diversity of music on Beehive Candy.

There's a selection of all of the above in this months recommendations, nicely mixed up, see what you think.

Camera Obscura. OK this is easy, I love the very excellent Scottish band Camera Obscura, and am a little late in encouraging some more interest in their latest album (released back in April).

The new album 'My Maudlin Career' is their fourth and continues to present some wonderful indie pop songs, crafted in a very definitive and warm style.

David Mead has a unique sound, that draws comparisons with Paul Simon or Harry Nilsson, not a bad couple of reference points. His calm atmospheric sound is just fine to unwind to. He has a new album out on Cheap Lullaby Records in August, this is from it.

Donny Hue and the Colors, Have a new album coming out on June 23rd (Letter From New Virginia - Kora Records), and ahead of this they have been releasing some free 'b sides' from the recordings.

They describe themselves as a mixture of experimental & country. The song 'Steps' reminds me of Syd Barrett & early Pink Floyd, whilst 'Oh Lord', is someplace else all together.

'Recorded in an old barn in the middle of Luray, VA, Letter from New Virginia paints a majestic landscape of harmonica laced hoe down folk. Once again, the Colors came from all over the eastern seaboard and west coast to put together the follow up to 2007’s Donny Hue and the Colors debut Folkmote. Burleigh Seaver (former member of OK GO) brought in his recording gear and captured all of the harmonies of the album at once with mixing and mastering done back in DC'.
Listen:

Fanfarlo from London, England, are totally new to me, and am I glad that a promo for them came my way!

They initially reminded me in part of Arcade Fire, and also Beirut, in a very positive way, that said they have a unique sound of their own, a real mixture of alternative pop & modern folk music. Please check them out.

Josh Ottum is from Seattle, Washington, USA, home of so many fine bands and artists, along with the very excellent KEXP.

Upbeat and refreshing music is how I would describe this. I know very little about Josh, the music can be likened to anything from Sufjan Stevens to Steely Dan, its worth a listen to, that's for sure.

School of Seven Bells are rightly in my humble opinion getting broader recognition, for their superb music. Their mixture of dream pop, shoegaze and Indie electronic music is just oh so good.

Often referred to just as SVIIB, they are a three-piece band formed by Benjamin Curtis of Secret Machines, together with identical twins Alejandra and Claudia Deheza.

Well that's it for this round up, I do hope you get to enjoy some of these, and as always support the artist's where you can.
Beehive Recommends 2009 (MP3's)