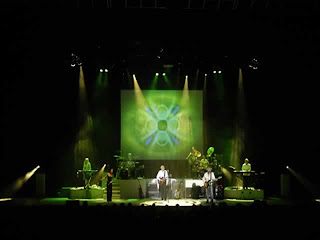 This is The Moody Blues recorded live in concert at the LA Forum (Los Angeles, USA) on Saturday, 3rd December, 1983, the concert was subsequently featured in full on a Westwood One broadcast first aired on the 31st December 1983.

This was part of 'The Present' USA tour that included Stevie Ray Vaughn as the opening act.

Comments: The band continue to tour around the world, and have the ability to sell out major venues, even in these harsher economic times.

The Moody Blues formed back in May 1964, and after a number of top 40 single successes, developed more into an album based band and (depending on your point of view this might be good or bad) pioneered what became progressive rock.

COPY AND PASTE IN FULL

BTLFAN said…
i saw this tour in portland,maine
my only chance to see stevie ray
just incredible!! both of them
10 August 2009 at 15:21

Steve MC said…
I also saw them in Portland, Maine just two weeks before. Stevie Ray Vaughn simply at on the edge of the stage and played solo, nothing else but him, his guitar, and a wide black hat. And the Moody Blues were awesome.
5 May 2010 at 05:11

A-Mfan said…
I just came across your blog. So much great music here to experience. I started with this show. Many thanks and keep up the great work.
16 January 2011 at 19:23