It's getting nearer to that time of year when the music biz tends to release what they hope will be big sellers (and the repackaged best of 'whoever' emerge of course), so it's great to see that there is still no shortage of new & newer bands vying for attention.

The Kora Records continue on their march for world domination with Sweden's Fredrik (pictured) who have their second full length album 'Trilogi' released this coming November 17th. Fredrik started out in late 2006 as the songwriter/sound artist duo of Fredrik and Lindefelt. The idea was to attempt narrative structures in music through the combination of electro acoustic composition and folk-infused musical form. Before the release of their critically acclaimed debut, Na Na Ni, the lineup was expanded to a 6-piece.

On stage the sextet could be seen playing banjo, clarinet, cello, wind up music boxes and hand made instruments along side bass, guitars and drums. The following 6 months saw Fredrik back in Malmö recording new material in the form of an EP-trilogy. Each one was surreptitiously self-released on highly limited 3" CDs in hand made origami packaging. Fredrik and Kora present the release of the EP’s as a proper full length entitled Trilogi. You can get a good feel for the band at their MySpace site.

Listen:
'Locked in the Basement' 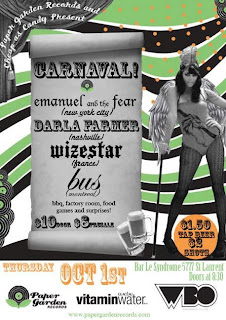 Paper Garden records are also pretty busy right now and will be featuring a number of their acts at the Pop Montreal Festival on October 1st & 2nd.

We've featured Darla Farmer already here on the Beehive, and now its the turn of the fabulous Emanuel and The Fear.

From Brooklyn, New York this 11 piece band are a little bit Arcade Fire, a tiny bit Polyphonic Spree and pretty much their own thing as well.

Both Darla Farmer & Emanuel and The Fear have been drawing the attention of the likes of David Byrne, TV On The Radio, and Apples In Stereo, and if you are in or around Montreal here's a chance to catch up with them.

For the rest of us you can check them out here.

I have of course featured The Dimes here before and not to long ago at that. The band have a new album scheduled to be out on the 24th November 09 entitled 'The King Can Drink The Harbor Dry'.

It is a mixture of modern folk meeting sixties pop, with influences ranging from Simon and Garfunkel to The Beatles' White Album, my goodness we are name dropping today!

Anyhow from what I have heard so far it could well be the Folk-Pop album of the year, but as always don't just take my word for it, here is the opening song from the forthcoming album.

The new album form Brookville is out on the 29th September the third and some time since the last his bio explains why. 'After releasing two critically acclaimed albums—2003’s Wonderfully Nothing and 2006’s Life In the Shade— under the Brookville moniker, musician and producer Andy Chase didn’t think he had another in him. Whatever it was that had inspired those albums seemed to have disappeared and Chase, who also plays in the critically-acclaimed band Ivy, assumed that his tenure with Brookville was complete.

Turned out that after the release of Life In the Shade and a North American tour with French pop act Tahiti 80 - whom he produced - Chase simply needed a break. Simultaneously playing in three bands, producing Juliana Hatfield and Trashcan Sinatras, being a partner in New York’s Stratosphere Sound recording studio, signing three new acts to his label Unfiltered Records, and trying to maintain a ‘normal’ life as a husband and a father can do that to you'.

Seems a reasonable enough explanation for me. Anyhow this remixed version of one of the forthcoming songs arrived in the mailbox on Friday, and as I liked what I heard he gets the Beehive thumbs up.

Finally just one piece of news. WNYC's Soundcheck hosts the premiere Performance by Rosanne Cash of Her Upcoming Album 'The List'.

Rosanne Cash and her band will debut several songs from the album live and over the airwaves at 93.9 FM on WNYC's popular chronicle of music and culture, Soundcheck, on September 23 at 2 PM, giving the world intimate insight into one of America 's best loved musical families. Her performance will simultaneously stream live as a videocast.

Hope you enjoy some of the recommendations, new music is alive and well!