Siouxsie and The Banshees - Hamburg 1982 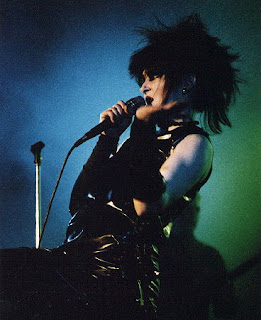 Good quality live recordings of Siouxsie and The Banshees appear to be a bit thin on the ground, which is surprising considering they have toured regularly down the years and the whole punk & new wave scene in the early days was hardly water tight against bootlegging.

So for one of my favorite bands that came out of the original punk music scene, on this occasion I will have to settle for a pretty good audience recording of a very good live show.

This is the band live at Markthalle, Hamburg, Germany way back on December 12th, 1982.

Comments: Some audience recordings are awful. This one is highly listenable and the audio quality stable through out, giving a really good feel for the show.

The Banshees followed their 1981 album (Juju) in 1982 with A Kiss in the Dreamhouse. The record, featuring strings on several numbers, was an intentional contrast to their previous work, with Sioux later describing it as a "sexy album".

The British press greeted it enthusiastically. Richard Cook in the NME finished his review with this sentence: "I promise. This music will take your breath away." At that time John McGeoch was struggling with alcohol problems, and was hospitalized on his return to a promotional trip to Madrid. The band fired him shortly thereafter. Steven Severin asked Robert Smith to take over guitarist duties again; Robert Smith accepted and rejoined the group in November 1982.

It is highly likely then that The Cures Robert Smith is part of the line up for this gig.

Buy: - MP3's at Amazon.co.uk - Siouxsie And The Banshees

Siouxsie and The Banshees

Anonymous said…
this is interesting.. not a lot of their stuff i find listenable, and then some very.. angular goth music, this is unusual, so thanks.. hermann
10 September 2009 at 15:13

vincent the soul chef said…
Thank you for this classic performance. I have a vinyl bootleg that contains a performance done on New Year's Eve of the same year. One day I will get around to ripping it properly as the record was pressed with the pitch sped way up. If you wish, I can send you a copy. You can drop a comment on my blog and let me know.