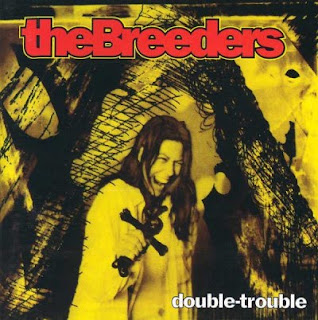 Double Trouble is a collection of live performances recorded during The Breeders 1993 tour.

Formed in 1988 their first album, Pod (1990), received critical acclaim but was not commercially successful. The Breeders' most successful album, 1993's Last Splash, produced the hit single "Cannonball", and this material is from the tour that promoted the Last Splash album.

The Breeders' history began when Kim Deal, then bassist of the Pixies, began writing new material while the band were on a post-Surfer Rosa tour of Europe with Throwing Muses. As neither band had plans for the short term, Kim Deal discussed possible side-projects with Throwing Muses guitarist Tanya Donelly. After rejecting the idea of creating a dance album together the pair decided to form a new band. 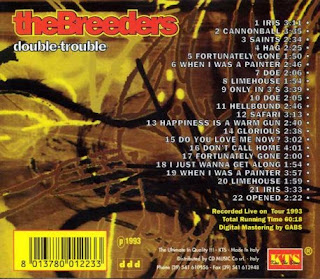 Double Trouble was yet another release by Kiss The Stone (KTS) records (as previously mentioned the company was based in San Marino, where the law allowed the company to market bootlegs as long as it placed royalties for the artists in an escrow account).

One upside of this is the audio quality and packaging of the original silver discs was often very good. This is the case here, and this mp3 version is is a must for any fan of The Breeders.

Buy: Mp3's at Amazon.co.uk - The Breeders