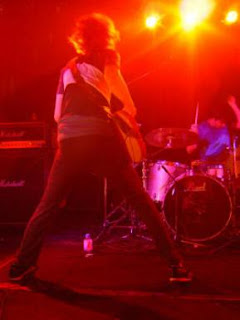 Some email promo's have me yawning from about the second line onwards this one started as follows and kind of gained my attention.

'After an arduous recovery from a touring accident on the Autobahn while on tour in Germany (singer and main creative force Mike Law broke seven bones on the left side of his body) Brooklyn's New Idea Society has finally regained the momentum that was brewing on their previous album, "The World Is Bright and Lonely" (2007)'.

Now I will be upfront and say I had not previously registered New Idea Society however having gained my attention I gave the two songs from the forthcoming album a listen and reckon they deserve at the very least a fairly decent plug from the Beehive.

Background: The new song is from an upcoming album produced by Andy LeMaster (Bright Eyes, Azure Ray). They are a huge departure from the bands previous recordings. Tracked in Brooklyn and Athens, New Idea Society searched out more of their Byrne/Eno, influences, partially a necessity, since Law was unable to play guitar due to injuries and was writing mostly around his working hand on keyboards and vintage synthesizers.

Eventually as injuries healed guitars found their was back into the mix but a precedent had been set for an album centered around the keyboard and piano playing of Chris DeAngelis and the reserved playing of drummer Alan Cage (who was lured back to drumming from semi-retirement from Quicksand/Seaweed by the excitement of the songs). As Law notes, "For the first time New Idea Society became a collaborative band with Alan and Chris being so prominent in the formation of our sound. The tour accident and some important people leaving our lives framed the mood of the album and how we were all feeling in that aftermath".
After tracking 19 songs the band is happy to share the song "Thorns" as it prepares the album for release.