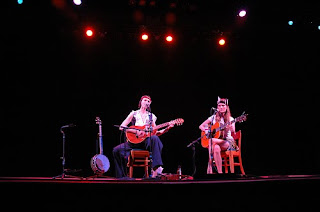 For those who are not familiar with The Ditty Bops they are an American band from Los Angeles, California. They were previously with Warner Brothers, however they now self produce their material.

They are noted for their tight vocal harmonies and playful style, and are headed by Abby DeWald (vocals and acoustic guitar) and Amanda Barrett (vocals, mandolin and dulcimer). For those of you who are familiar with their wonderful music, then this is an absolute delight!

This is a full concert of the band performing live at The Freight & Salvage Coffee House (The Home of Traditional Music) in Berkeley, California. This concert took place on the 7th March 2008 and the recording includes both sets.

A few notes regarding this recording. It would appear to be from two sources as the second set is noticeably louder. The quality of both sets suggest soundboard as the audience levels on both are as would be expected. Whatever - it is a great gig & the encore sets new standards in live performance !

tomatodon said…
thanks, Mike. i wasn't familiar with them before. they remind me of early Dan Hicks and the Hot Licks without Dan. I can picture Dan singing most of these songs.
13 December 2009 at 17:42