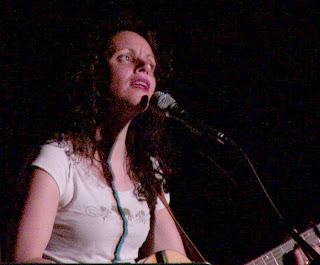 One reviewer of this show wrote "If you've never heard Lucy Kaplansky perform before, you're in for a treat. Her songs can be dark and brooding, uplifting and joyous, personal and revealing; always satisfying.

The recording quality here gives you the sense that you're sitting in the first few rows of the hall. Download this show, put on a good pair of headphones, and re-live an extraordinary evening with a superb singer-songwriter".

As audience recordings go this is better than some soundboard copies of shows I have heard. There are a few level issues on track one that are quickly fixed, apart from that this is a superb recording. Performing live in concert at The Beachland Ballroom, Cleveland, Ohio, USA on the 10th February 2006 this is Lucy Kaplansky.

Lucy Kaplansky was originally from Chicago, and at the age of 18, decided not to go to college, and moved to New York City. She became involved in the city's folk music scene, particularly around Greenwich Village, where she played with, among others, Suzanne Vega, Shawn Colvin and Richard Shindell.

In 1983, she decided to become a psychologist, enrolling in Yeshiva University. She continued playing music while doing her PhD, and began to have some success as part of a duo with Shawn Colvin. However, when they began to attract record company interest, Lucy Kaplansky declined, choosing instead to set up a private practice and become a staff psychologist at a New York hospital. For several years, she concentrated largely on her work, and played little in the way of concerts. However, she still did some session work, such as singing backing vocals in the studio for Suzanne Vega.

By the early 1990s she found herself increasingly drawn back to music. Shawn Colvin, who by this time had experienced some commercial success, offered to produce an album for her. The result, The Tide, a mixture of her own songs and several covers, was released by Red House Records in 1994. At this time, she decided to give up her psychology practice, and return to music full-time. She released four more albums before her most recent, Over The Hills, was released in 2007.