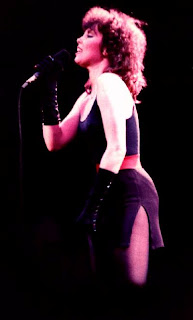 Lets start 2010 with some real rock energy from just over thirty years ago courtesy of Pat Benatar.

Pat's big break into music had happened a year before this concert when she headlined New York City’s famous Tramps nightclub from March 29th to April 1st, 1978, where her performance impressed representatives from several record companies.

She was signed to Chrysalis Records by founder Terry Ellis the following week."There was a long period of three years, when I spent my time taking demo tapes around and being rejected by one record company after another. Then just two days after the debut concert with the band, we were signed to a record contract..." Recorded in June and July 1979, Pat Benatar debuted the week of August 27th 1979 with the release of 'I Need A Lover' from the album 'In the Heat of the Night'.

This concert just over a year later captures Pat Benatar on classic form at the Paramount Theatre, Seattle, Washington, USA back on November 22nd, 1979.

Pat Benatar's debut album 'In the Heat of the Night' was released in October 1979, and reached Number 12. It established Pat Benatar as a new force in rock. Producer Mike Chapman, who had worked with Blondie and The Knack, broke his vow not to take on any new artists when he heard Pat Benatar's demo tape.

Mike Chapman personally produced three tracks on the album, while his long-time engineer and now independent producer, Peter Coleman (who also supervised Nick Gilder) oversaw the rest. In addition, Mike Chapman and his partner, Nicky Chinn, wrote three original songs for the LP, in addition to a rearranged version of a song they wrote for Sweet, "No You Don't".

The album also featured two songs written by Roger Capps and Pat Benatar, as well as "I Need a Lover" written by John Mellencamp, "Don't Let It Show" written by Alan Parsons and Eric Woolfson. The album would be Pat Benatar's first RIAA certified platinum album.

Anonymous said…
She is great!