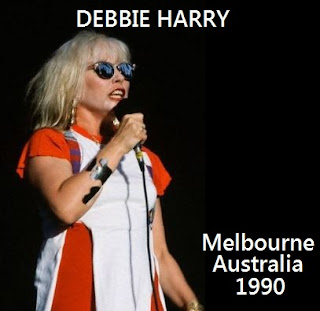 This is Debbie Harry performing live at the Metro Nightclub in Melbourne, Australia back on the 20th March 1990. This was the only gig outside of the UK and USA in 1990 (as I understand) and the set list was a mixture of solo material and Blondie songs.

Debbie released the album Def, Dumb and Blonde in 1989. At this point she reverted from "Debbie" to "Deborah" for her professional name. The first single "I Want That Man" was a hit in Europe, Australia, and on the U.S. Modern Rock Charts. The success of the single propelled the album to number 12 on the UK charts. However, with little promotion from her record company in the US, it peaked at number 123. She followed this up with the ballad "Brite Side" and the club hit "Sweet and Low". "Maybe for Sure", a track originally recorded by Blondie for the Rock and Rule animated film, was the fourth single released from the album in June 1990 to coincide with a UK tour (her second in six months). "Kiss It Better" was also a Top 15 Modern Rock single in the U.S.

From 1989 to 1991, Debbie Harry toured extensively across the world with former (and ongoing) Blondie guitarist Chris Stein, Underworld's Karl Hyde, and future Blondie bassist Leigh Foxx. In July 1991, she played Wembley Stadium with INXS, (I remember the Wembley concert well, she was the main reason I went along and after Chris Stein played what appeared to be an improvised guitar solo introduction Debbie came on stage with whip in hand and delivered a 'rather dominant' set).

Whilst in Melbourne for the 1990 gig she was interviewed  by local TV and after the interview piece part of her show was shown live in the TV feature. (see YouTube clip below).

Anonymous said…
Impossible to get on this flameupload thing, just wants a lot of info, for you to then but, then runs you around in circles! tried 20 mins, but sadly, I give up!!
21 October 2011 at 01:01

Unknown said…
Hey, Any chance this recording could be made available again? My wife was there on the night. Thanks, Jason
30 August 2014 at 02:25