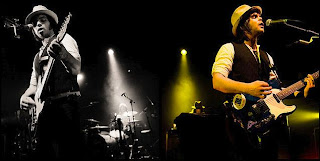 This is Supergrass live at Rock City, Nottingham, England back on the 18th January 1998. The band split up last year (2010) siting musical differences however during their eighteen years together a legacy of energised, excuberent performances both live and recorded will I am sure be remembered with great fondness by many.

In mid-1994, Supergrass issued their debut single "Caught by the Fuzz" on the small independent local (Oxford) label Backbeat Records. The song recounts lead singer and guitarist Gaz Coombes' experience of being arrested and cautioned by police in possession of cannabis. The limited release of vinyl copies sold out quickly, thanks in part to support from John Peel on his Radio One show. The Parlophone label signed the band and re-released the single in the autumn of the same year. It achieved the rare feat of both NME and Melody Maker "Single Of The Week" status in the same week.

"Mansize Rooster", released in February 1995, peaked at number 20 in the UK Single Charts and "Lenny" just made it into the top 10. "Lenny" was followed soon afterwards by the band's debut album, I Should Coco (May 1995), which entered the UK Album Charts at number one. It achieved a half-a-million sales in the UK and over a million worldwide. NME reviewer Steve Sutherland gave the album a nine out of ten rating, writing, "These freaks shall inherit the earth." The album's fourth single, the double A-side release "Alright"/"Time", stayed in British Top Three for a month, peaking at number two.

Supergrass followed I Should Coco with 18 months of heavy touring, appearing at festivals such as Scotland's T In The Park and the Glastonbury Festival. After Performing in Rio's Hollywood Rock Festival in April 1996, Supergrass met the infamous train robber Ronnie Biggs, and apparently said to him, "I was frightened for my life when I heard there was a supergrass in the area." A photograph of Ronnie Biggs and Gaz together was subsequently included in the music video for their single release of the same year, "Going Out". "Going Out" was a success peaking at number five in the UK charts and sold more than 100,000 units. Having taken a short break in 1996, Supergrass returned to Sawmills Studio to work on In It For The Money (released April 1997), produced by the band themselves with John Cornfield. The album was a critical and commercial success, it also has since gone platinum in the UK. But some were confused by the darker sound. The single, "Richard III" reached number two. Subsequent releases, "Sun Hits the Sky" and "Late In The Day" reached numbers 10 and 18 respectively.

Around this time Supergrass also appeared on the front cover of The Big Issue (a UK magazine sold by the homeless as part of a self help iniative), interviewed for the magazine at Heathrow Airport by infamous ex-drug smuggler Howard Marks.