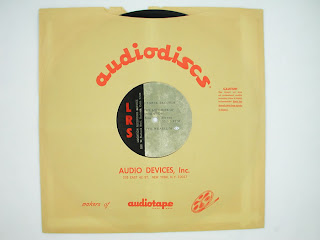 Rather than just rewrite the liner notes that accompanied this I have just copied and pasted them in full, the story behind this is all there and reads as follows.

As early as in the late ’60s, Frank Zappa was already planning a big box called The History & Collected Improvisations of the Mothers of Invention. Among the discs in the collection (it has been reported as a 12-record set, then a 10-LP set and later a nine-disc set) is The Weasel Music.

Some tracks from this big box found their way to Weasels Ripped My Flesh in 1970. According to one review on the internet, “This is Zappa’s most avant garde work. If Ornette Coleman, Albert Ayler and Peter Brotzmann got together and made a rock album, it would sound like this.” The wikipedia notes: “Weasels Ripped My Flesh mostly captures the Mothers on stage, where they employ frenetic and chaotic improvisation characteristic of avant-garde free jazz.”

The Weasel Music Acetate would fit right at home on Weasels Ripped My Flesh. As fans know, Zappa’s song titles rarely offer glimpses into what the songs are about. Hence Chamber Music Piece 1 is not a soothing piece to while away a lazy afternoon. It’s actually a free-jazz piece with a “slow” build-up but it doesn’t really turn frenetic. On the other hand, Mozart Ballet would be considered a light classical piece, with tinkling piano, that seems to elicit screaming and laughter from the audience and the song ends with some heavy-duty feedback and guitar wailing. The track, Some Zany MOI Bullshit, might be what happens if Randy Newman had tried his hand at free-jazz.

For those who only read about The Weasel Music, here it is, thanks to TFEC who shared the tracks on the internet. The tracks are taken off the original acetate, went for auction at eBay. The winning bid was US $2,550.00.

"So I get a call from the widow of the great artist, Neon Park. She says, "I've been going through Marty's stuff (Neon's real name was Marty) and I have a lot of records of his. I was talking to [mutual friend] Betzy and she said you like records. Do you want them?" and, being the vinyl hound I am, I said, "You bet! I'll take 'em all sight unseen." She said, "Okay, I'll go pull the can back in from the street." She had had them all in a trash can waiting for the Sanitation Engineers to pick them up.

Now I know Neon worked for many years doing album art for Warner Brothers (best known for Zappa's WEASELS RIPPED MY FLESH and his string of covers for LITTLE FEAT) and was on their mailing list for new releases. Upon going through the LPs from the trash bin I found the usual assortment of product, some good, some not to my liking.

In an envelope addressed to Mr. Frank Zappa at his Laurel Canyon address, I found these studio acetate test recordings: a copy of Jean-Luc Ponty's Zappa tribute LP, KING KONG, and a curious disc labeled "The Weasel Music". Suspecting that this might indeed BE SOMETHING, I cautiously played it once. It seemed to be a live recording of the Mothers goofing around on stage doing what I guessed to be a mock-ballet. While light pseudo-classical piano arpeggios play (Ian Underwood?) you can hear the shuffling of feet and various antics while the crowd respond with laughter and amusement. I would imagine that it was mostly a visual presentation as opposed to an essential Zappa musical composition.

I kept this relic in good condition, still in its original envelope and cardboards. I lent it to my new friend and Zappaphile, Krel, when I moved to Little Rock. He has played it only twice, recording it both times."

In Concerts I Trust said…
Hello!
Great site of your´s, keep it up!
If you´d like to link to my concertrecording site
"In Concerts I Trust", I would be thankful, I´ve linked to your´s , thank you!
Have a look, 5 masters up now here (more to come soon):