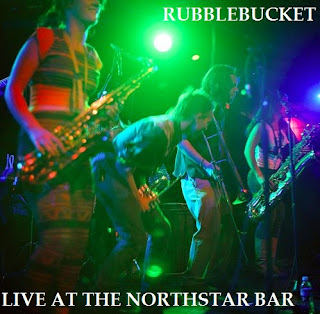 This is Rubblebucket live at the North Star Bar, Philadelphia, PA, USA  recorded live on the 17th April, 2010.

Beehive Candy featured Rubblebucket in October 2009 as a reasonably new band to checkout, this is what we had to say in part back then - It's not only my opinion that Rubblebucket are one outstanding band, Seven Days Vermont named them best band of 2008, and others have equally applauded their excellent music and live performances.

Their second album (following up on last years debut 'Rose Dream') is simply titled Rubblebucket, and cutting straight to the point I absolutely love it.

If all of this is sounding like an over the top plug for Rubblebucket then I apologise, it's just that they are really, really one hot outfit. As things stand the new album may become my favorite of the year OK so it's still only October however as a contender, Rubblebucket have raised the bar considerably.

In March 2010 Rubblebucket relocated to Brooklyn, NY and continued to tour nationally through the summer with appearances at festivals such as High Sierra, All Good Music Festival, and the Liberate Music and Dance Festival. On October 19, 2010 they released their Triangular Daisies EP which included a cover of the Beatle's "Michelle" which Paste Magazine named on their list of 50 Greatest Beatles Covers of All Time.

In Spring 2011 Rubblebucket released their third full length album Omega La La. It was recorded at DFA studios and produced by Eric Broucek (LCD Soundsystem, !!!, Holy Ghost) & mastered by Joe Lambert (Animal Collective, Dirty Projectors, Herbie Hancock). On April 4, 2011 the band released it as a free download via their website preceding an official physical release on June 21 through MRI Distribution.