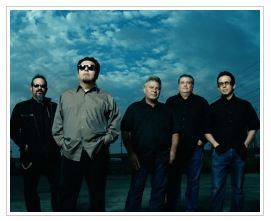 This is Los Lobos performing live at The Pavilion, Portland, ME, USA back on the 27th July 1997.

From Wikipedia - Originally, they called themselve Los Lobos del Este (de Los Angeles) ["The Wolves of the East of Los Angeles"], which was a play on the name of a norteno band called Los Lobos del Norte and the fact that they (Los Lobos del Este) were from east L.A. The name was quickly shortened to Los Lobos. The band's first noteworthy public appearance occurred in 1980 at the Olympic Auditorium in Los Angeles when they were hired by David Ferguson and CD Presents to open for Public Image Ltd. In the late 1980s and early 1990s the band toured extensively throughout the world, opening for such acts as Bob Dylan, U2 and the Grateful Dead.

Los Lobos returned with The Neighborhood in 1990, and the creative and wildly experimental Kiko (produced by Mitchell Froom) in 1992. In 1991, the band contributed a lively cover of Bertha, a song which they often performed live, to the Grateful Dead tribute/rain forest benefit album Deadicated. In 1994 they also contributed a track, Down Where the Drunkards Roll, to the Richard Thompson tribute album Beat the Retreat. In 1993, they performeed "Feliz Navidad" on the film Sesame Street Stays Up Late!. On the band's twenty-year anniversary they released a two-CD collection of singles, out-takes, live recordings and hits entitled Just Another Band from East L.A.

In 1995, Los Lobos released the prestigious and bestselling record Papa's Dream on Music for Little People Records along with veteran guitarist and singer Lalo Guerrero. The band also scored the film Desperado. The album track "Mariachi Suite" won a Grammy Award for Best Pop Instrumental Performance, and stands as their last Grammy Award to date (the other two Grammy Awards were in the category of Best Mexican-American Performance in 1983 and 1989 for the song Anselma and the album La Pistola y El Corazon).

In 1996 they released Colossal Head. In spite of the fact that the album was critically acclaimed, Warner Brothers decided to drop the band from their roster. Los Lobos spent the next few years on side projects. The band contributed along with Money Markto the AIDS benefit album Silencio=Muerte: Red Hot + Latin produced by the Red Hot Organization performing "Pepe and Irene." Los Lobos signed to Hollywood Records in 1999, and released This Time. Hollywood also reissued 1977's Del Este de Los Angeles. In 2000, Rhino/Warner Archives released the Cancionero: Mas y Mas boxed set.

The band continue to perform with the same line up (see their website for the most recent info on the band).

Andrew Condon said…
Sounds pretty great, thanks, but the filesets i downloaded were incomplete, two copies of "That Train" and a bunch of other tracks missing ("Angels", everything from "That Train" to "Let's Say Goodnight"). Still good!
24 October 2011 at 18:53