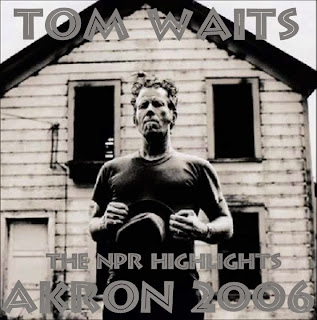 This is Tom Waits performing live at The Civic Centre, Akron, Ohio, back on Sunday, August 13th 2006. I am not certain if the source of this recording is taken directly from an FM broadcast, however it is a probable assumption as the final track ends without a smooth fade suggesting the radio announcer may have been cut off in their prime.

Whatever the recordings history, this is a very fine quality recording of Tom Waits in concert in a tour that showcased some of the songs from the forthcoming November 2006 album release 'Brawlers, Bawlers & Bastards', that said this edited recording only featured one song 'Bottom of the World' from that album.

Although the NPR broadcast was only part of the show, I have read elsewhere that the featured tracks were by far the best performed ones at this gig.

At the beginning of 'Tom Trauberts Blues' Tom Waits remarks about a man and a shirt which was apparently a reference to somebody getting on stage and throwing a shirt at Tom or his piano. The crowd were also described by somebody at the concert as 'the worst they had been amongst' with even a fight in the audience at one point. All of which makes sitting at home and listening to the edited version of the performance kinda rewarding in some ways.

Interestingly the tracks broadcast from the whole concert did not all run in order, as performed in the show, actually that's quite a boring point, to much detail, no need to become obsessive, "and now back to the music".

Make It Rain
Hoist That Rag
Shore Leave
Dead and Lovely
God's Away on Business
Falling Down
Tango Till They're Sore
Christmas Card from a Hooker in Minneapolis
Tom Traubert's Blues (Four Sheets to the Wind in Copenhagen)
'Til the Money Runs Out
What's He Building?
Eyeball Kid
Trampled Rose
Murder in the Red Barn
Bottom of the World
Shake It
Encore:
Day After Tomorrow
Lie to Me
Get Behind the Mule
Encore 2:
Clap Hands
Sins of My Father / Wade in the Water

Narrow Dog said…
Just found your site looks like you have posted some interesting stuff. Thanks for doing this.
19 May 2015 at 19:09