An Australian Triple Play? - Why Not! 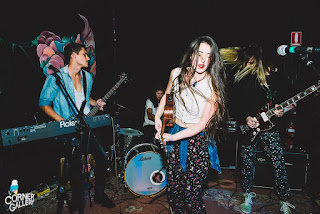 All about Edie Green - Straight off the back of a sold out launch and a hot 4 out of 5 review from The Music for their EP 'New Heavy', Perth's Edie Green are ready to spread their gooey brand of indie rock to ears across Australia.

Their sonic melting pot is a result of uninhibited jam sessions comprising of jazz trained drummer Tyler, glam-rock/funk guitarist Conor, metal-minded bassist Elliot and folk/neo-soul singer Sophie. Together they produce an eclectic and dynamic sound that flirts from blues-rock to funk-folk.

The first single born from this collaboration, 'Southern Palms', featured on Triple J Unearthed and earned the number 1 position on Twin Cities' Live n ’Local top 50 songs of 2013, also resulting in TV ad syncs. In the same year, Edie Green won the WA leg of the National Campus Band Competition and took out second place at the National final held in Canberra. They were then also selected as an Australian finalist in the RAW Independent Artists Musicians Award for 2013.

What can we say? Gooey blues-rock and funky folk, how outrageous this shouldn't work, but it does. Bags of energy, sometimes fast, sometimes slow and powerful, an excellent selection of songs, if you like the featured track, go get the EP, simple as that! 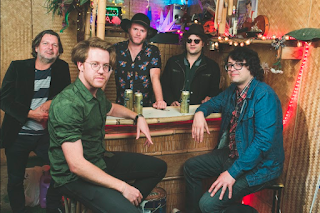 And all about Tenderhooks - first came the songs, written across nine countries in hotels, on trains and buses, and in the bedrooms of their creator Dan Durack. After a few years there were enough songs to make an album – a sprawling but branded collection built on Durack’s depth of love and knowledge of music. At that point beyond the limitations of one man and one guitar, the songs that had become an album became a band. In 2012 Durack returned to his West Australian home of Perth from a decade-long European exile, and Tenderhooks were born.

Recorded in 2014 at SquareJaw Studios in Perth, Western Australia, I Weakened At The Weekend is the first single from Tenderhooks’ self-titled debut album, released in June 2015. A veteran from much-loved Perth rock ensemble Three Orange Whips, Durack brought Tenderhooks to life using personnel he grew up alongside in his local scene. In a city like Perth, that means some spectacular talent. Co-produced by Luke Steele (the genius and voice behind Empire Of The Sun and The Sleepy Jackson) the Tenderhooks album features some of Perth’s finest, most accredited musicians. Old mates, now at the top of their game.

Oh this is such an annoyingly catchy tune, you know the sort, play it loads because it's just right and then 'boom' it gets stuck in your head. Oh well the sacrifices we make, hitting repeat as I write. Seriously, they have that infectious thing going on.

And finally all about Wallflower - Following the critical acclaim of their breakthrough single, Canberra band Wallflower return to the public eye with the feel good indie banger of the year “Fabricated”. The first single off their debut EP and direct lyrical follow up to their breakthrough single Ambien, “Fabricated” is hand claps, oohs and ahhs, silky guitars, signature skeez and the realisation that life can be a bit shit sometimes, but that’s okay.

Formed late in 2013, Wallflower have gone on to become a marquee act of the Canberra music industry and a hidden secret of the capitals leafy streets. Falling somewhere between Kanye West, Jinja Safari and Coldplay, Wallflower are an eclectic band carving their own sound and have already built a dedicated and ever growing fan base. Named as one of Triple J Unearthed’s top 10 bands you missed in 2014, it’s time for Wallflower to leave the comfort of Canberra and become the band square in the middle of the nation’s consciousness for 2015.

This song gently develops, however from the opening chords you know you are in for style and quality. Great harmonies, superb musicianship, if your gonna do super cool you have to have that 'something' Wallflower 'have it' so we can enjoy it.