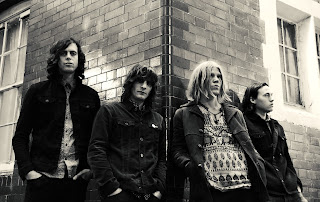 Background - The Pacers draw their influences from the sixties Psych/Garage scene, mixing it up with their own unique ideas to create unforgettable and  energetic live performances in the same vein as The Stooges and The Stones, with a healthy dose of freak out psychedelia.

The band formed in the late summer of 2013 when Alexander Friedl and guitarist Harry Stam met under what they describe as "mysterious circumstances". With a shared interest in all things 60's and a desire to escape the monotony of everyday life, they duo picked up their guitars and began writing songs.

A former band mate of Harry, bass player Jay Creswell, was next to join The Pacers, closely followed by drummer Jamie Yuan. With the line up complete, the band set about making a name for themselves on the underground music scene, playing a string of venues primarily in north and east London which have earned them a loyal and ever increasing fan base. 'Losing Touch' is their debut single.

A modern twist on what was the music of my youth (yep - that old), 'Losing Touch' is an excellent introduction, genuinely leaving me wanting to hear, a whole lot more by this band. A must listen and a reminder that there is much to mine from past musical styles, and opportunities to put your own slant on things. 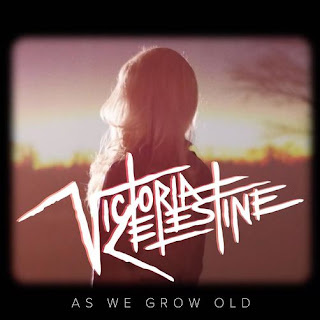 Victoria Celestine - As We Grow Old.

Background - Coming off the success of her second single, “Something More,” innovative and avant-garde artist Victoria Celestine has released her anticipated third single, “As We Grow Old”.  The sultry and energetic track is the latest off of Victoria Celestine’s upcoming debut EP (due for release within the next year). The first single off of the EP, “Wasted Tears” was released in June 2015 with accompanying music video. With the pop synth rhythms reviving their way back into popular music, Victoria is a stand out new artist bringing 80’s style to her video similar to the likes of Walk the Moon’s “Shut Up and Dance.”

Not to be overlooked as another cheeky pop artist Victoria Celestine is truly the odd one out.  Having spent her early years growing up on two ends of the world, France and in San Antonio, Texas, music became Victoria’s fluent language. With piano as a first instrument, she expanded her horizons by picking up the guitar as a teenager once moving back to the US and has never looked back. Combined with the talent of song writing, she is a unique force to be reckoned with.

Coming across Victoria at an open mic in down town San Antonio, Gordon Raphael (producer of The Strokes, Regina Spektor and more) invited her to have her first studio experience recording her first seven songs acoustically.  Harnessing her song writing capabilities, Victoria has placed in the International Song writing Competition four years in a row.  She was also a nominee in the International Acoustic Music Awards and has charted on the iTunes Charts. Look for these three songs that she produced with Blake Harnage (of Versa) when she was only 17, on an EP next year.

Bright and breezy synth pop, plus Victoria's vocals seemingly just right for this style of music. The production is light with neither the soundtrack or the vocals, disturbing the other, highly enjoyable. 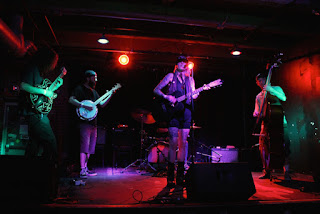 Absinthe Rose - Stories Of Our Youth, (From the album 'Black Earth').

Biography - Absinthe Rose is a Boston based Folk band consisting of singer songwriter Kimbo Rose on acoustic guitar and vocals and a core rhythm section of well-seasoned Boston area music veterans. The band mixes different styles of music including Folk, Americana, Gypsy Jazz, Blues, Punk and whatever else they feel like into a original and diverse sound! Regular touring and a tight live performance mixed with a strong DIY ethic and both personal and political subject matter has quickly gained the band notoriety in the underground DIY music scene!

The musical brainchild of singer songwriter Kimbo Rose and was originally formed in 2008 as a solo acoustic project based out of the Medford and Ashland Oregon area. In 2009 Kimbo Rose relocated to Boston MA and self-released her debut CD entitled Digging Ditches & Escaping Holes on her newly formed DIY record label she named Screech Owl Records. This was a ten-track solo acoustic album of material she had been playing for years in Oregon and recorded in Boston. In the spring of 2010 Kimbo Rose partnered up with Bill on Bass, Josh on Banjo, Nick on Electric Guitar and Rich on Drums and the band as you know it today was born!

They recorded their debut EP with the full band entitled “Consistency Through Scepticism And Awareness” in the fall of 2010 and began playing out around the Boston area! Soon after the band embarked on their first extensive West Coast US tour in the spring of 2011 and hasn't stopped since. In the winter of 2012 they recorded their full-length album entitled The More That We Learn, The More We Learn That We’re Wrong which was released in the spring of 2013! Since then Absinthe Rose have toured the US and played regularly throughout the North East and East Coast!

The band entered the studio in the spring on 2015 and began recording their new full length album entitled Black Earth which was self-released on the bands own label in September of 2015! This record turned out to be their most dynamic and eclectic album to date showing the bands true diversity and Kimbo's full range of lyrical and musical influences! The band is presently making plans for a full US and European Tour in 2016! The rest is 'herstory' yet to be written!

Arguably The Pogues were the first folk/punk band, albeit with a mixture of Irish traditional numbers, along with their own original songs. Absinthe Rose take on a variety of genres, that create a bigger melting pot, and they do it very well. The featured track is the only one I could find that can be shared, the album version may be a better mix, and what an album! Full of energy, attitude and angst, Absinthe Rose deliver a powerful mixture of songs, that demand yours and my attention.