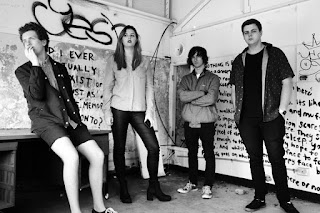 Background - Eleven Eleven is a formation of two bands who morphed together back in 2012. Consisting of Kaitlin Brown on vocals, Max Heaslip on bass, Otto Falson-Ree on drums, and Harry Brown on guitar, they mix the worlds of riff-rock and sweet melodic vocals to create huge, unique walls of sound. Eleven Eleven have been recognised on several occasions, being nominated at the Music Oz awards, working their way into the Top 50 of Triple J Unearthed several times and hitting number one with the track ‘King Tide’, as well as gaining a 5 star review from Alex Dyson on Unearthed, who commented that "Some people are young, some people rock. These guys cover both categories, then smash the categories against an amp and walk off the stage flipping the bird at the crowd."

Eleven Eleven is currently working on new material whilst they release their new single ‘The Original’ through The A&R Department. 'The Original was the very first song we ever wrote as a band. It came out of a jam we had at our very first band practise, and a couple of weeks later with a bit more fine trimming and streamlining it became the song that it is today. This song came about as we were sick and tired of the monotony of modern music. We wanted to make something different, riffy, and heavy, as well as having catchy melodies and some unique harmonies.” ‘The Original’ was recorded at Paradyme Studios and mixed at Hercules Street Studios.

Rock with a chunky bass and a driving rhythm, courtesy of some sharp guitar playing and pounding drums. It's just right for Kaitlin Brown's vocals. It's rock and it's straight to the point. 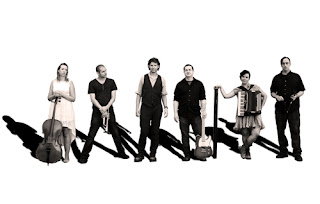 John Byrne Band - The Immigrant And The Orphan.

The John Byrne Band is led by former Patrick's Head front man and Dublin native John Byrne. Their debut album, After the Wake, was released to critical acclaim on both sides of the Atlantic in 2011. With influences ranging from The Chieftains to Planxty to Bob Dylan, John’s songwriting honours and expands upon the musical and lyrical traditions of his native and adopted homes. On this LP, John's band features members of Amos Lee, Calexico, The Fractals, Huffamoose and The Modern Inventors.

In late 2012, John Byrne had a new batch of songs written for the follow up to his critically acclaimed 2011 album After the Wake. Then, as often happens, life intervened. An accident that left him needing surgery and months of recuperation, coupled with personal tragedy and loss, left him staring at a body of work that held, for him, little meaning anymore. “The songs were fine, they were good songs, I just couldn’t find myself in them anymore, “says Byrne from his home in the Fishtown neighbourhood of Philadelphia. With Byrne’s fan-base clamouring for a promised new release, John and his touring band recorded 2013’s Celtic Folk, a collection of folk tunes from Ireland and America that the band had been sliding into their live sets during the After the Wake tours.

The album, which would eventually make the Folk DJ Charts, entering at number 36 (FolkRadio.Org), gave Byrne the time he needed to reflect and write. “I wrote about the bad stuff and the amazingly good stuff that came out of the bad,” he reveals. The result of this is The Immigrant and the Orphan, an album of 12 songs that Terry Roland of No Depression magazine in LA, who stumbled upon the band on their recent Kickstarter campaign, calls “Some of the finest songwriting I have heard this year, each tune on this album carries an honesty, integrity, and quiet passion that will draw you into its world for years to come”.  Roland had only heard rough mixes that Byrne felt comfortable sharing with the writer after an interview. “There is anger, joy, sadness and reflection in the songs, “says Byrne, “But most of all I wanted to get to the very deepest root of each situation, to be open, to be exposed, but to leave the listener room to enter, interpret and find their own meaning in the songs.” Byrne’s skillful handling of the subjects has led to some of his most honest yet accessible songs to date, as witnessed in the first single Dirty, Used Up, Chewed Up, Screwed Up Love, a defiant folk-rock song with strong echoes of John Hiatt and Lucinda Williams. The B-Side, Sing on Johnny, is an homage to his Father.

The role call alone shows that this is far more than a solo effort by John Byrne. If any element of Celtic Folk or Americana is your thing, then this album is an absolute yes. John has a very listenable vocal range and each song is a journey within itself. Despite the size of the cast, the attention to detail and gentle feel in some songs, makes for a very uncluttered and enjoyable album.