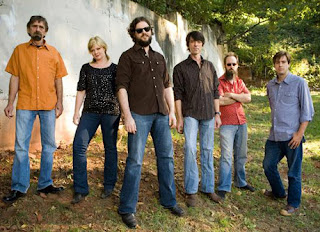 From the Internet Archive (IA) this is the Drive-By Truckers in a private family and friends performance at band member Mike Cooley's House in Gardendale, Alabama, USA.

It is an incredible acoustic performance with superb audio quality and as one reviewer put it " this recording is amazing. I was having a few beers listening to it and the next thing I know I'm doing shots of Elijah Craig and singing out loud like a jackass".

Of the time before and around this session Wikipedia say's - After three years on the road, a tight-knit group of musicians emerged and began work on 2001's double album, Southern Rock Opera. The album weaves the history of Lynyrd Skynyrd into a narrative about a fictitious rock band called "Betamax Guillotine," whose story unfolds within the context of the South during the 1970s. Southern Rock Opera was originally released independently on Drive-By Truckers' own Soul Dump Records on September 12, 2001, and garnered praise from fans and critics alike. In order to meet the new demand brought on by, among other things, a four-star review in Rolling Stone, Southern Rock Opera was re-issued by Mercury and Lost Highway Records in July 2002. Soon after, Drive-By Truckers were named Band of the Year by No Depression.

Before Drive-By Truckers went on tour in support of Southern Rock Opera, the band ran into a problem when they were left with only two guitarists (Cooley and Hood) following the departure of Rob Malone in late 2001. The band added fellow Alabamian guitarist and songwriter Jason Isbell (originally from Greenhill, Alabama) to their line-up as the band's third guitarist. During his five years with Drive-By Truckers, Isbell's compositions became as highly praised as those of Cooley and Hood. After signing a new deal with Austin-based record label New West, Drive-By Truckers set about recording the follow-up to Southern Rock Opera. The result was 2003's Decoration Day, which, like its predecessor, received much critical praise. It was another concept album, containing characters who are faced with hard decisions about marriage, incest, break-ups, revenge, murder, and suicide.

After years of producing and playing with Drive-By Truckers, bassist Earl Hicks left the band on December 22, 2003. Hicks was immediately replaced by studio bassist Shonna Tucker, then wife of guitarist Jason Isbell. Tucker had previously guested on Decoration Day playing upright bass on the Cooley-penned track, "Sounds Better in the Song."

Sound Quality: Excellent (your in the room with them).