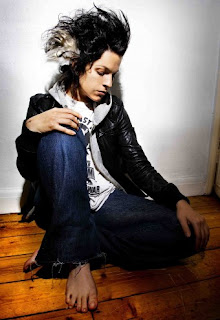 From the Internet Archive (IA) this is Jesca Hoop live at Band On The Wall, a venue in Manchester, England, back on Monday 24th May 2010.

This is what the Manchester venues website had to say about Jesca prior to the gig - Jesca Hoop was born in Southern California to strict Mormon parents. She grew up singing traditional folk tunes in four-part harmony, but soon broke away from this background, becoming a homesteader and working with children. As a nanny for Tom Waits and Kathleen Brennan’s three children, Hoop gained both musical experience and notoriety; Waits said of Jesca, 'Her music is like going swimming in a lake at night'. Following exposure through radio station KCRW, Jesca toured with Polyphonic Spree, Mark Knopfler, Andrew Bird and Elbow – with Guy Garvey also dueting with Hoop on her (then) latest acclaimed album Hunting My Dress.

In addition to this we can add (from Wiki) As a result of meeting Tom Piper, the touring manager of the band Elbow, Hoop moved to Manchester, England in 2008. Initially she found it difficult to adjust "as a California girl, I find it hard to stay under that canopy of cloud". After settling in the Chorlton area of the city, Hoop spent 18 months recording new material for the album “Hunting My Dress” which was released in 2010. She had parked "a lorry trailer in my back garden that we use as an extension (...) where I go to write". In the same year she signed with the US-based label Vanguard Records.[8] It was followed by the “Snowglobe E.P.” in 2011, which consisted of a handful tracks recorded prior to her move to the UK. Hoop described them as "folk songs" and the EP received a degree of critical acclaim. The following year she released “The House That Jack Built” and in 2014 “Undress”; a re-interpretation of songs recorded four years ago.