A Couple Of Good Ones: Murder Shoes - Rissy 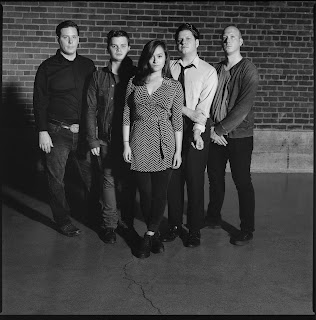 Bio - Sometimes, it really does boil down to who you know. Shortly after Derek Van Gieson first moved to Minneapolis, he met fellow guitarist Chris White through an ex-post-hardcore-punk pal. For a year or so, Derek and Chris stockpiled hundreds of songs. The songs ran the gamut of 60s pop/garage nuggets, gothic folk, chaotic post-punk, 80s funk and R&B, country/western, shoegaze, rockabilly, and surf.

It could have been a real hot mess, but Derek brought Tess Weinberg in to the picture and she tied the whole thing together with her sultry cross-genre vocals. They further refined their sound as a trio and just when they thought they had it figured out, bassist Tim Heinlein and drummer Elliot Manthey brought the volume, power, and muscle. Inside of a year as a quintet, Murder Shoes recorded and released three EPs, a full length album, and went on tour. After many adventures in the studio and live, the band has refined the eclectic nature of their sound, which can now accurately be described as “Murder Shoesy.”

The band at times remind me of Blondie circa their first album, however that's just part of the story. There is a harder edge to the guitar driven music and vocals are if anything smoother, the band drift from post punk into surf rock, and plenty of other places. As debut albums go this is a solid collection of songs, the band have done themselves proud. 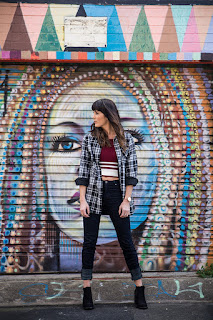 Background words - It took barely 10 minutes to write the words and vocal melody, but two years of massaging and marshalling the various creative forces to turn ‘Sunset Raining’, a new electronic-pop tune by seasoned newcomer Rissy, into a reality.

“I arrived at the studio, listened to the track just once... and started writing madly,” says Rissy of her first acquaintance with the catchy creation from the genius duo L D R U and Yahtzel.

“I wrote the whole song within 10 minutes and we recorded it shortly after,” says Rissy. “It was a very natural, very easy process.” Sunset Raining is about crazy, blissful love. "Get high up on your platform baby" meaning, shine like you should.

Rissy’s strong, upbeat voice flows like honey over Carmada’s spiky electronic backdrop, thoughtful sound sculpting that works a treat. That was 2013. So why the delay in releasing the song? “There were a few entanglements that we needed to undo, and a couple of musical options that took time to explore. It had to be right for me.”

Rissy, slim and dark-haired, was determined not to compromise artistically. ”It wasn’t an easy time for an impatient soul. But I’m stoked with the result and that A&R Records is handling my first commercial label release.” The singer/songwriter from Sydney’s northern beaches crafts her electronic tunes of relentless optimism using a staple of compelling percussive sounds and engaging pop- driven melodies. “I usually start with hearing the chords and beats. That gives me the whole vibe of the song, which then writes the melody and lyrics.”

She has been collaborating with some of EDM's finest producers including Carmada (AUS), L D R U (AUS), Sam Roberts (AUS), Pretty Visitors (AUS) and Hotsauce (USA). “Sunset Raining” by Rissy will be released 30th of October 2015.

This is a really nice song. The gentle electro backing is just right and Rissy has a very distinctive and pleasing voice. It deserves to be heard.