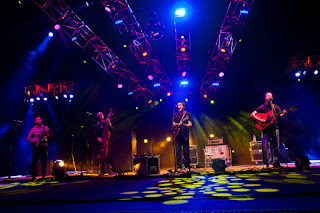 From the Internet Archive (IA) this is Yonder Mountain String Band Live at The Fillmore Auditorium on the 21st April 2007.

The Yonder Mountain String Band (abbreviated YMSB and referred to by some as just "Yonder") is an American progressive bluegrass group from Nederland, Colorado. Composed of Dave Johnston, Ben Kaufmann, Adam Aijala, Allie Kral, and Jacob Joliff the band has released five studio albums and several live recordings to date. Founding member and mandolinist Jeff Austin left the band in 2014 due to creative differences and conflicting career goals.

Just some of the bands history - In December 1998, the four musicians formed Yonder Mountain String Band which was to open for a band at the Fox Theatre in Boulder. They have since developed both a bluegrass and jam band fanbase, and can often be found on tour. Their debut album Elevation was released on Frog Pad Records, an independent record label run by the band, in fall 1999. From 1999 to 2001 they performed as one of the many attractions at NedFest, a music festival held in the band's hometown. By 2000, the group was also playing larger venues, such as The Fillmore in San Francisco, California. The band has released several live albums with material from live performances, but fans are welcome to record the concert they attend for themselves, as the band is taper-friendly.

There were several tapers during this early period that worked hard to document the band and spread recordings. Sandy "Bigfoot" Alexander, "Bluegrass" Brad Burleson, Josh Parsons, and Mark Burgin all contributed heavily to documenting Yonder during these early years. Jeff Austin once said that when these guys started to follow Yonder around recording them, that they felt like Yonder had started to make a mark. Burleson went on to work for the band as monitor engineer, as well as recording every show. Both Alexander and Burleson were inducted into the Kinfolk Hall of Fame for their efforts in documenting YMSB during these early years, particularly the unplugged encores that Yonder became known for during that time period.

In 2005, their recording of "Think for Yourself" was included on the album This Bird Has Flown – A 40th Anniversary Tribute to the Beatles' Rubber Soul.