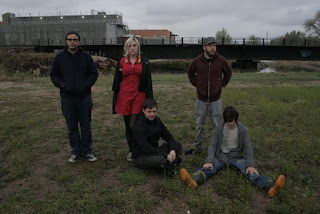 Kissing Party - Trash. (from the album - 'Looking back it was romantic but at the time i was suffocating).

Background - Getting it's release on Hot Congress Records on the 2nd November 2015, just some of the comments made about Kissing Party include - Tired of Ty Segal? Bored with Beck? Wanna slit your wrists at the thought of another Jack White album... From the Mile High City comes Kissing Party, your new favourite band whether you like it or not. - This Is Indie Slop...

How much emotional weight can one impart in a two minute pop rock structure? Such is the game Kissing Party plays, as sampled on their new album "Looking back it was romantic but at the time i was suffocating'. At the forefront of the 'Slop Pop' movement, Kissing Party is the sound of debt, regret, heartbreak, hair dye & Pennsylvania. This is the band's second release on Denver's Hot Congress Records (Denver, USA) available on CD, Vinyl, Cassette and download. Kissing Party has nearly perfected what it was already doing best: making straight ahead, two-minute pop songs that stick to the mind like glue."  - The Onion A.V. Club

"Kissing Party encourage even the wallflowers amongst us to take to the dance floor, or at least give us a reason to drink up."  - Three Imaginary Girls

So the band and the music has been around for a while, still better late than never regarding Kissing Party. One commentator put as 'early nineties indie with a twist'. Can't disagree with that, there is something annoyingly good going on musically, slop pop they call it, and I am loving slop pop. Facebook (here). 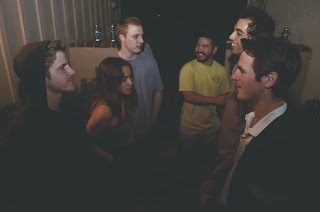 Background - If you can’t purchase your own private island, listening to the band may just be the next best thing. And, if you haven’t yet fallen for the band, now is the perfect time to pop in those earbuds, get comfortable and soak up some sweet, musical sunshine.

“Enough,” was recorded, produced, mixed and mastered by Bob Curtain at The Alamo, “Enough” is the first single off of Private Island’s highly anticipated sophomore EP, ‘Sunbreak’ which drops in the first half of 2016.

Comprised of Christian Lum, Michelle Guerrero, Tommy Nickerson, Roger Mawer, Tim Barbour & Cameron Anderson, Private Island has drawn much-deserved comparisons to acts like Kings of Leon and Young the Giant. In the Fall of 2014, Private Island released their debut EP A Good Look, which set the Internet positively abuzz, garnering nearly half a million streams in the first year.

This song mixes genres into one compelling sound. Musically it stands out as a superbly crafted song, whilst the energy and upbeat vibes come crashing through, giving the song a distinct and highly enjoyable edge.

Background - The Salt Riot is a passion trio that comes on strong and as big as stadium rock, that is somehow as intimate as a favorite LP from your childhood heroes. Pre-release single “Boom” has already gotten lots of YouTube love as the band has been playing oodles of shows in the Emerald City and elsewhere.

The band blend an eclectic mix of creative influences into the engaging, driving alternative rock sound known as The Salt Riot. Their first full length Dead Star was recorded and produced with innovative veteran David Miner at Chartreuse Muffin Studios. (Three songs, “Would You Walk?”, "Nameless" and “Giver” were recorded and produced with Jack Machin at Mighty Maverick Studios). They had worked with Miner on an earlier EP, and say that sculpting their first full length there felt like creating “in their second home.”

What is Dead Star about? “Soooo many things,” Julia says. “But most importantly its name derives from perception. A ‘dead star’ is still seen millions of miles away but it is actually gone. It only lives in our perception. I like the duo translation of the fallen rock star, fallen icon, the results of the fallen ego. Once on top of the world, burnt to a crisp. The album is released on 20th November.

The album I guess sits somewhere between Alt Rock & Indie. It's engaging and 'Boom' is a reasonable indicator of what to expect. They have the ability to sound pretty stripped back, so that each instrument & the vocals are distinct, and stand out, and yet the power is always simmering away. It's got passion and has that something, that draws me back for another listen.