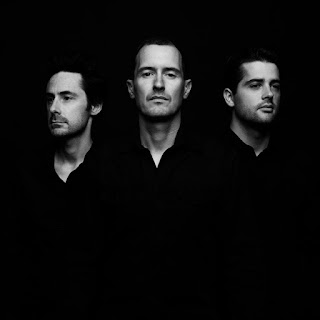 The Glorious - I Wake Up.

Promo words - The hauntingly beautiful single from Australia’s The Glorious, “I Wake Up” is the first release from Falcon, the Melbourne band’s forthcoming full-length album co-produced by Julian Mendelsohn (Paul McCartney, Belle & Sebastian). Neil Rogers of The Australian Mood, notably said The Glorious create a “captivating sound with great songs, soaring harmonies, and heartfelt playing.” Falcon will be released by The MuseBox on January 8th.

“I Wake Up” is gently bathed in sparse, mournful piano and ghostly keyboards. Its gorgeously stark production allows lead singer and main songwriter David Mather’s chorus to soar while maintaining a hushed immediacy during the rest of the hymn-like track. Mather explains that “I Wake Up” was inspired by a lost loved one communicating with him via a dream. The tune represents his band’s unashamedly heartfelt approach to songwriting in that it is “a meditation on the possibilities of renewal, the sense of being deeply connected with someone.”

Founded in Melbourne in 2004 by Mather and longtime friend and collaborator Dan Gard'ner, The Glorious began as a vehicle for Mather's songwriting before evolving into a full band. The band's lineup solidified with the addition of Joel Loukes (bass) and Danny Stain (guitar). The release of a self-titled EP in 2005 immediately announced the band's trademarks: expertly crafted songs, rich melodies, and atmospheric soundscapes. Readings Monthly called The Glorious’s second album, Sweetwater, “warm, relaxed, and raw.”

Mather, who feels a “strong kingship with America and is ready to hit the U.S.,” confirms that Falcon will feature the open and honest stylings already established by The Glorious on previous recordings: “If I'm going to sing something, I'm going to stand behind it. The lyrics are real. They are a truth. I'm singing from a very real place.”

'I Wake Up' is a beautiful ballad that rounds off the exceptional album 'Falcon'. The band are quite capable of  knocking out some power chords and meaty bass lines, along with gentler acoustic and piano lead numbers. Vocals are 'stand out' across the album, that thoughtfully drifts through a variety of genres and styles.

Background words - Upstate New Yorkers Brittany Cohen and Mike Horgan are the the snotty, at times heartfelt, lo-fi combination that is Home Lives. The pair are ready to give you their killer debut EP Cool Waves, Young Blood, ahead of their Shea Stadium show in Brooklyn (on November 7th).

Mike started the project chasing a desire to create hooky tunes about brazenly personal topics like childhood, love, post-college millennial life and the human condition. Their debut single marries these heavy concepts together in a way that is seamless and yet charmingly naive.

The EP was recorded with Chris Daly at Salvation Recording Co. in New Paltz, NY. Daly has worked with a whole bunch of artists such as Porches, Frankie Cosmos, Quarterbacks, Diet Cig and PWR BTTM. Jamal Ruhe was on mastering duties at West West Side Music and has mastered albums by bands like Titus Andronicus, Built to Spill and Swans. Noah Bowman, drummer of Diet Cig, plays drums on the entire Home Lives EP.

This is a feisty three track EP. Lot's of passion and high energy in the featured track, which in reality is only a third of their musical story. Harmonies and melodies are more to the fore on the other two songs, whilst 'Cool Waves, Young Blood' is their 'in your face calling card'.