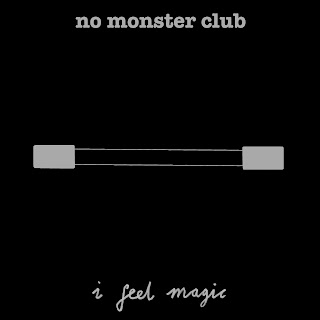 Background/promo - The new album 'I Feel Magic'  from Ireland's No Monster Club - the follow-up to this year's highly acclaimed 'People Are Weird' LP, will be released by Popical Island on February 5th 2016. 'Lemonade' (the first single to be taken from the album), basks in a strange, new found intersection of Future Islands, Talking Heads and early Flaming Lips.

Prolific Irishman Bobby Aherne may well be one of the best kept secrets in the world of underground pop music. In addition to a previous life using the moniker 'Dublin Duck Dispensary' (and his work as a member of Grand Pocket Orchestra, Women's Christmas, Paddy Hanna and Ginnels), this album marks the 28 year old's eleventh - and most fully realised - release as No Monster Club.

'I Feel Magic' could be the sound of Neutral Milk Hotel, William Onyeabor and the Beach Boys jamming out a series of lost one-hit-wonders on to a tape deck in their bedroom. This is rich, cartoonish art pop following in the eccentric lineage of Tommy Roe, R. Stevie Moore, Jeff Lynne, Captain Sensible, and Kevin Ayers...

After just one listen to this, the band's seemingly bizarre, unorthodox journey so far will begin to make a lot more sense; No Monster Club has performed everywhere from Wisconsin to Verona (with a live band consisting of members of Dublin's 'Popical Island' collective), embarked upon several tours with The Polyphonic Spree, supported scene luminaries such as Wavves and Ariel Pink, mimed along to their hit 'La La Land' on American children's TV, contributed music to documentary films about subjects as diverse as surfing, hotdogs and baseball, inducted to the club personalities as diverse as Jedward and Jeffrey Lewis, and become known for their surreal music videos which tend to feature puppets, dance routines, clones and singing dogs.

'Lemonade' has a quirky and yet quite intense feel to it. Musically it's as refreshing as ice cool lemonade (sorry - compulsive requirement to say that). Whatever the influences and references mentioned above in the promo, this song, has dug it's hooks into me, it's a little different, but highly enjoyable. 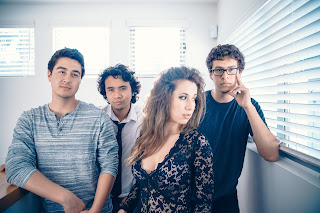 Bio - Mleo (muh-lee-oh) is an alternative pop/rock band born in Sacramento and raised in Los Angeles. A blossoming project of young, well-trained musicians, Mleo has its roots in the cities of Sacramento and Los Angeles. The band originally started as a trio in the year of 2012 with members Audrey Reed, Victor San Pedro, and Nick De La O, and has grown immensely since then. The three already had years of experience performing together at their high school in Sacramento, CA, so it made sense that they would continue to perform together as they furthered their education in L.A.

Led mostly by singer Audrey Reed, the group brings influences of jazz, funk, indie rock/pop, R&B, hip hop, and hard rock. With a variety of musical perspectives, the band strives to become the face of the modern rock band. They continue to shape this vision by writing songs with no boundaries, yet retaining elements that have kept listeners interested throughout the history of music both melodically and lyrically.

'Rediculous' builds on the bands 2014 record Sunken City. I've included the title track for the album over in BeeVids, and although 'Rediculous' has been about for a while I wanted to feature it, simply because it's such a fine song, from what is a very talented band.